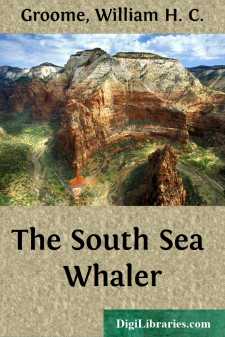 “A prosperous voyage, and a quick return, Captain Tredeagle,” said the old pilot as he bade farewell to the commander of the Champion, which ship he had piloted down the Mersey on her voyage to the Pacific.

“Thank you, pilot. I suppose it will be pretty nearly three years before we are back again,—with a full cargo, I hope, and plenty of dollars to keep the pot boiling at home. It’s the last voyage I intend to make; for thirty years knocking about at sea is enough for any man.”

“Many say that, captain; but when the time comes they generally find a reason for making one voyage more, to help them to start with a better capital. But as you have got your young ones aboard, you will have their company to cheer you.”

As the old pilot stepped along the deck he shook hands with two young people, a boy and a girl, who were standing near the gangway.

“Good-bye, Walter; good-bye, Miss Alice; look after father, and obey him, and God will bless you. If we are all spared, I hope to see you, Walter, grown into a tall young man; and you, Miss Alice, I suppose I shan’t know you again. Good-bye; Heaven protect you.” Saying this, the old pilot lowered himself into his boat alongside, and pulled away for his cutter, which lay hove-to at a little distance.

The Champion was a South Sea whaler of about four hundred tons burden; with a crew, including Mr Andrew Lawrie, the surgeon, of fifty officers and men. The chief object of the voyage was the capture of the sperm whale,—which creature is found in various parts of the Pacific Ocean; but as the war in which England had been engaged since the commencement of the century was not over, she carried eight guns, which would serve to defend her both against civilised enemies and the savage inhabitants of the islands she was likely to visit. The usual license for carrying guns, or “Letters of Marque,” had been obtained for her by the owners; she was thus able not only to defend herself, but to attack and capture, if she could, any vessels of the enemy she might meet with. Captain Tredeagle, being a peace-loving man, had no intention of exercising this privilege,—his only wish being to dispose of the ventures he carried, and to obtain by honest exertions a full cargo of sperm oil.

Walter and Alice waved their hands to the old pilot, as his little vessel, close-hauled, stood away towards the mouth of the river. It seemed to them that in parting from him the last link which bound them to their native land was severed. They left many friends behind them; but it was their father’s wish that they should accompany him, and they eagerly looked forward to the pleasure of seeing the beautiful islands they were likely to visit, and witnessing the strange sights they expected to meet with during the voyage.

While the pilot vessel was standing away, the head-yards of the Champion were swung round, the sails sheeted home; with a brisk northerly wind, and under all the canvas she could carry, she ran quickly down the Irish Channel....