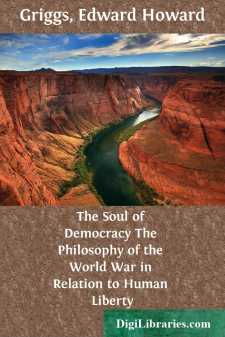 I THE WORLD TRAGEDY

We are living under the shadow of the greatest world tragedy in the history of mankind. Not even the overthrow of the old Roman empire was so colossal a disaster as this. Inevitably we are bewildered by it. Utterly unanticipated, at least in its world extent, for we had believed mankind too far advanced for such a chaos of brute force to recur, it overwhelms our vision. Man had been going forward steadily, inventing and discovering, until in the last hundred years his whole world had been transformed. Suddenly the entire range of invention is turned against Man. The machinery of comfort and progress becomes the enginery of devastation. Under such a shock, we ask, "Has civilization over-reached itself? Has the machine run away with its maker?" The imagination is staggered. We are too much in the storm to see across the storm.

When the War began, it was over our minds as a dark cloud. It was the last conscious thought as we went to sleep at night, and the first to which we awakened in the morning: wakening with a dumb sense of something wrong, as if we had suffered a personal tragedy, and then as we came to clear consciousness we said, "O yes, the War!" The days have passed into weeks, the weeks into months and years: inevitably we become benumbed to the long continued disaster. It is impossible to think deaths and mutilations in terms of millions. Even those who stand in the immediate presence of it and suffer most terribly become calloused to it: much more must we who stood so long apart and have not yet felt the brunt of it. Even our entrance into the whirling vortex, drawing ever nearer our shores, has failed to waken us to a realizing sense of it. Nevertheless, these years through which we are now living are the most important in the entire history of the world. It is probable that the future will look back upon them as the years determining the destiny of mankind for ages to come.

How this terrible fact of War falls across all philosophies! Complacent optimisms, so widely current recently, are put out of court by it. The pleasant interpretations mediocrity formulates of the universe are torn to tatters. There is at least the refreshment of standing face to face with brute actuality, though it crash all our "little systems" to the ground. Philosophy must wait. The interpretations cannot be hastened, while the facts are multiplying with such bewildering rapidity. The one certainty is that an entirely new world is being born—what it will be, no one knows.

Nevertheless, we have gone far enough to recognize that all our thinking will be transformed under the influence of the struggle. It will be impossible for us, after the War, to do what we have done so widely hitherto: proclaim one range of ethical ideals and standards, and live to something widely different in practice. Either we shall have to abandon the standards, or bring our conduct measurably into harmony with them. We shall be unable longer to hold unconsciously in solution Christianity and the gospel of brute force....