The Soul of a People 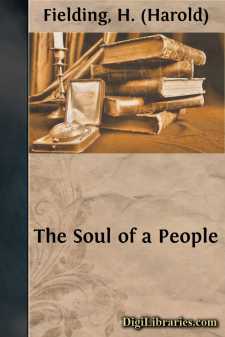 'The observance of the law alone entitles to the right of belonging to my religion.'—Saying of the Buddha.

For the first few years of my stay in Burma my life was so full of excitement that I had little care or time for any thought but of to-day. There was, first of all, my few months in Upper Burma in the King's time before the war, months which were full of danger and the exhilaration of danger, when all the surroundings were too new and too curious to leave leisure for examination beneath the surface. Then came the flight from Upper Burma at the time of the war, and then the war itself. And this war lasted four years. Not four years of fighting in Burma proper, for most of the Irrawaddy valley was peaceful enough by the end of 1889; but as the central parts quieted down, I was sent to the frontier, first on the North and then on the East by the Chin mountains; so that it was not until 1890 that a transfer to a more settled part gave me quiet and opportunity for consideration of all I had seen and known. For it was in those years that I gained most of whatever little knowledge I have of the Burmese people.

Months, very many months, I passed with no one to speak to, with no other companions but Burmese. I have been with them in joy and in sorrow, I have fought with them and against them, and sat round the camp-fire after the day's work and talked of it all. I have had many friends amongst them, friends I shall always honour; and I have seen them killed sometimes in our fights, or dead of fever in the marshes of the frontier. I have known them from the labourer to the Prime Minister, from the little neophyte just accepted into the faith to the head of all the Burmese religion. I have known their wives and daughters; have watched many a flirtation in the warm scented evenings; and have seen girls become wives and wives mothers while I have lived amongst them. So that although when the country settled down, and we built houses for ourselves and returned more to English modes of living, I felt that I was drifting away from them into the conventionality and ignorance of our official lives, yet I had in my memory much of what I had seen, much of what I had done, that I shall never forget. I felt that I had been—even if it were only for a time—behind the veil, where it is so hard to come.

In looking over these memories it seemed to me that there were many things I did not understand, acts of theirs and customs, which I had seen and noted, but of which I did not know the reason. We all know how hard it is to see into the heart even of our own people, those of our flesh and blood who are with us always, whose ways are our ways, and whose thoughts are akin to ours. And if this be so with them, it is ten thousand times harder with those whose ways are not our ways, and from whose thoughts we must be far apart. It is true that there are no dark places in the lives of the Burmese as there are in the lives of other Orientals. All is open to the light of day in their homes and in their religion, and their women are the freest in the world. Yet the barriers of a strange tongue and a strange religion, and of ways caused by another climate than ours, is so great that, even to those of us who have every wish and every opportunity to understand, it seems sometimes as if we should never know their hearts. It seems as if we should never learn more of their ways than just the outside—that curiously varied outside which is so deceptive, and which is so apt to prevent our understanding that they are men just as we are, and not strange creations from some far-away planet.

So when I settled down and sought to know more of the meaning of what I had seen, I thought that first of all I must learn somewhat of their religion, of that mainspring of many actions, which seemed sometimes admirable, sometimes the reverse, and nearly always foreign to my ideas. It is true that I knew they were Buddhists, that I recognized the yellow-robed monks as followers of the word of Gaudama the Buddha, and that I had a general acquaintance with the theory of their faith as picked up from a book or two—notably, Rhys Davids' 'Buddhism' and Bishop Bigandet's book—and from many inconsequent talks with the monks and others....