The Song of the Cardinal 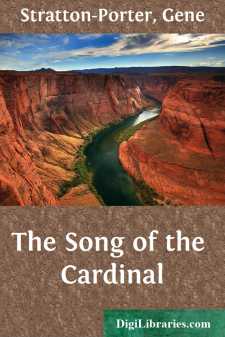 He darted through the orange orchard searching for slugs for his breakfast, and between whiles he rocked on the branches and rang over his message of encouragement to men. The song of the Cardinal was overflowing with joy, for this was his holiday, his playtime. The southern world was filled with brilliant sunshine, gaudy flowers, an abundance of fruit, myriads of insects, and never a thing to do except to bathe, feast, and be happy. No wonder his song was a prophecy of good cheer for the future, for happiness made up the whole of his past.

The Cardinal was only a yearling, yet his crest flared high, his beard was crisp and black, and he was a very prodigy in size and colouring. Fathers of his family that had accomplished many migrations appeared small beside him, and coats that had been shed season after season seemed dull compared with his. It was as if a pulsing heart of flame passed by when he came winging through the orchard.

Last season the Cardinal had pipped his shell, away to the north, in that paradise of the birds, the Limberlost. There thousands of acres of black marsh-muck stretch under summers' sun and winters' snows. There are darksome pools of murky water, bits of swale, and high morass. Giants of the forest reach skyward, or, coated with velvet slime, lie decaying in sun-flecked pools, while the underbrush is almost impenetrable.

The swamp resembles a big dining-table for the birds. Wild grape-vines clamber to the tops of the highest trees, spreading umbrella-wise over the branches, and their festooned floating trailers wave as silken fringe in the play of the wind. The birds loll in the shade, peel bark, gather dried curlers for nest material, and feast on the pungent fruit. They chatter in swarms over the wild-cherry trees, and overload their crops with red haws, wild plums, papaws, blackberries and mandrake. The alders around the edge draw flocks in search of berries, and the marsh grasses and weeds are weighted with seed hunters. The muck is alive with worms; and the whole swamp ablaze with flowers, whose colours and perfumes attract myriads of insects and butterflies.

Wild creepers flaunt their red and gold from the treetops, and the bumblebees and humming-birds make common cause in rifling the honey-laden trumpets. The air around the wild-plum and redhaw trees is vibrant with the beating wings of millions of wild bees, and the bee-birds feast to gluttony. The fetid odours of the swamp draw insects in swarms, and fly-catchers tumble and twist in air in pursuit of them.

Every hollow tree homes its colony of bats. Snakes sun on the bushes. The water folk leave trails of shining ripples in their wake as they cross the lagoons. Turtles waddle clumsily from the logs. Frogs take graceful leaps from pool to pool. Everything native to that section of the country-underground, creeping, or a-wing—can be found in the Limberlost; but above all the birds.

Dainty green warblers nest in its tree-tops, and red-eyed vireos choose a location below....