The Social Work of the Salvation Army 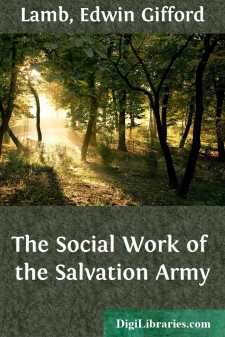 The Salvation Army was founded by William Booth in London, England, in 1865. Previous to this time Mr. Booth had been a successful clergyman in the Methodist Church, and had become widely known throughout England as a revivalist. As time passed, he had become more and more interested in the condition of the un-churched masses, and as his church did not approve of his taking up work among the masses in connection with it as an organization, he had, in 1861, separated from the Methodists. With little support, he established in London what was known as The Christian Mission.

From the first, numbers of converts were made, and soon several missions were established in London, and other cities of England. From the first, too, the agency of women was an important feature. Especially was this true in visitation among the lower classes. In regard to the foundation of the Army itself and in connection with its earlier successes, much credit must be given to Mrs. Booth, the wife of William Booth. She became as noted a speaker and revivalist as her husband, and together, they made plans for the movement. Unfortunately she died of cancer in 1890. Through these early years of the movement its management, almost unconsciously, developed along lines that were military in form. At first the title of "Captain" was used among the sailors and fishermen to designate the local leader of the company, and then it was extended wherever, among the rough element, the "Mr." or "Rev." would seem out of place. The usage and the spirit accompanying it soon spread, and by the year 1879 military methods and titles were officially added. The Rev. Wm. Booth, who, up to this time, had been known as "Superintendent of the Christian Mission," became "General" Booth, and the "Mission" became the "Salvation Army."

This addition of military methods seems to have accelerated the movement by favoring efficient and systematic control. Soon after this time, we find, the organization had spread to the United States, Canada, Australia, France, Switzerland, Holland, Belgium, Scandinavia, Germany and Italy. Then missionary work was taken up in India, and later on, in Africa, Java and Japan. At the present time (1908), according to its reports, the Army occupies fifty-two different countries and colonies. In no country has its rate of progress been more remarkable than in the United States, where in point of numbers, the local organization now ranks second only to that of Great Britain.

Along with the rapid growth went a differentiation almost as rapid and unique as the growth itself. In fact, both reacted on each other. The work was separated first into three main departments, viz.: Spiritual, Social and Trade. It will be necessary to make a brief statement of this differentiation in detail. In the Spiritual Department we have the extension of the original idea, that of converting the people. Corps, as the different religious groups were called, sprang up and multiplied until even the smaller towns were occupied....