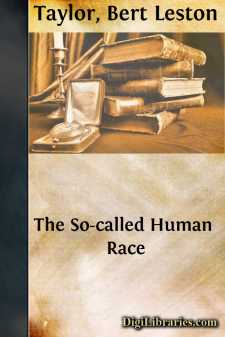 Bert Leston Taylor (known the country over as “B. L. T.”) was the first of our day’s “colyumists”—first in point of time, and first in point of merit. For nearly twenty years, with some interruptions, he conducted “A Line-o’-Type or Two” on the editorial page of the Chicago Tribune. His broad column—broad by measurement, broad in scope, and a bit broad, now and again, in its tone—cheered hundreds of thousands at the breakfast-tables of the Middle West, and on its trains and trolleys. As the “Column” grew in reputation, “making the Line” became almost a national sport. Whoever had a happy thought, whoever could handily turn a humorous paragraph or tune a pointed jingle, was only too glad to attempt collaboration with B. L. T. Others, possessing no literary knack, chanced it with brief reports on the follies or ineptitudes of the “so-called human race.” Some of them picked up their matter on their travels—these were the “Gadders.” Others culled oddities from the provincial press, and so gave further scope to “The Enraptured Reporter,” or offered selected gems of gaucherie from private correspondence, and thus added to the rich yield of “The Second Post.” Still humbler helpers chipped in with queer bits of nomenclature, thereby aiding the formation of an “Academy of Immortals”—an organization fully officered by people with droll names and always tending, as will become apparent in the following pages, to enlarge and vary its roster.

All these contributors, as well as many other persons who existed independently of the “Line,” lived in the corrective fear of the “Cannery,” that capacious receptacle which yawned for the trite word and the stereotyped phrase. Our language, to B. L. T., was an honest, living growth: deadwood, whether in thought or in the expression of thought, never got by, but was marked for the burning. The “Cannery,” with its numbered shelves and jars, was a deterrent indeed, and anyone who ventured to relieve himself as “Vox Populi” or as a conventional versifier, did well to walk with care.

Over all these aids, would-be or actual, presided the Conductor himself, furnishing a steady framework by his own quips, jingles and philosophizings, and bringing each day’s exhibit to an ordered unity. The Column was more than the sum of its contributors. It was the sum of units, original or contributed, that had been manipulated and brought to high effectiveness by a skilled hand and a nature wide in its sympathies and in its range of interests.

Taylor had the gift of opening new roads and of inviting a willing public to follow. Or, to put it another way, he had the faculty of making new moulds, into which his helpers were only too glad to pour their material. Some of these “leads” lasted for weeks; some for months; others persisted through the years. The lifted wand evoked, marshalled, vivified, and the daily miracle came to its regular accomplishment.

Taylor hewed his Line in precise accord with his own taste and fancy. All was on the basis of personal preference. His chiefs learned early that so rare an organism was best left alone to function in harmony with its own nature. The Column had not only its own philosophy and its own æsthetics, but its own politics: if it seemed to contravene other and more representative departments of the paper, never mind. Its conductor had such confidence in the validity of his personal predilections and in their identity with those of “the general,” that he carried on things with the one rule of pleasing himself, certain that he should find no better rule for pleasing others. His success was complete.

His papers and clippings, found in a fairly forward state of preparation, gave in part the necessary indications for the completion of this volume. The results will perhaps lack somewhat the typographical effectiveness which is within the reach of a metropolitan daily when utilized by a “colyumist” who was also a practical printer, and they can only approximate that piquant employment of juxtaposition and contrast which made every issue of “A Line-o’-Type or Two” a work of art in its way. But no arrangement of items from that source could becloud the essential nature of its Conductor: though “The So-Called Human Race” sometimes plays rather tartly and impatiently with men’s follies and shortcomings, it clearly and constantly exhibits a sunny, alert and airy spirit to whom all things human made their sharp appeal....