The Snow Image and other stories 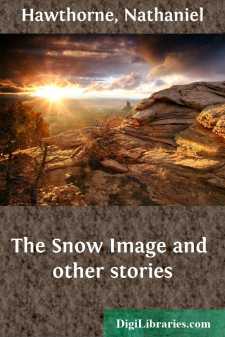 One afternoon of a cold winter's day, when the sun shone forth with chilly brightness, after a long storm, two children asked leave of their mother to run out and play in the new-fallen snow. The elder child was a little girl, whom, because she was of a tender and modest disposition, and was thought to be very beautiful, her parents, and other people who were familiar with her, used to call Violet. But her brother was known by the style and title of Peony, on account of the ruddiness of his broad and round little phiz, which made everybody think of sunshine and great scarlet flowers. The father of these two children, a certain Mr. Lindsey, it is important to say, was an excellent but exceedingly matter-of-fact sort of man, a dealer in hardware, and was sturdily accustomed to take what is called the common-sense view of all matters that came under his consideration. With a heart about as tender as other people's, he had a head as hard and impenetrable, and therefore, perhaps, as empty, as one of the iron pots which it was a part of his business to sell. The mother's character, on the other hand, had a strain of poetry in it, a trait of unworldly beauty,--a delicate and dewy flower, as it were, that had survived out of her imaginative youth, and still kept itself alive amid the dusty realities of matrimony and motherhood.

So, Violet and Peony, as I began with saying, besought their mother to let them run out and play in the new snow; for, though it had looked so dreary and dismal, drifting downward out of the gray sky, it had a very cheerful aspect, now that the sun was shining on it. The children dwelt in a city, and had no wider play-place than a little garden before the house, divided by a white fence from the street, and with a pear-tree and two or three plum-trees overshadowing it, and some rose-bushes just in front of the parlor-windows. The trees and shrubs, however, were now leafless, and their twigs were enveloped in the light snow, which thus made a kind of wintry foliage, with here and there a pendent icicle for the fruit.

"Yes, Violet,--yes, my little Peony," said their kind mother, "you may go out and play in the new snow."

Accordingly, the good lady bundled up her darlings in woollen jackets and wadded sacks, and put comforters round their necks, and a pair of striped gaiters on each little pair of legs, and worsted mittens on their hands, and gave them a kiss apiece, by way of a spell to keep away Jack Frost. Forth sallied the two children, with a hop-skip-and-jump, that carried them at once into the very heart of a huge snow-drift, whence Violet emerged like a snow-bunting, while little Peony floundered out with his round face in full bloom. Then what a merry time had they! To look at them, frolicking in the wintry garden, you would have thought that the dark and pitiless storm had been sent for no other purpose but to provide a new plaything for Violet and Peony; and that they themselves had beer created, as the snow-birds were, to take delight only in the tempest, and in the white mantle which it spread over the earth.

At last, when they had frosted one another all over with handfuls of snow, Violet, after laughing heartily at little Peony's figure, was struck with a new idea.

"You look exactly like a snow-image, Peony," said she, "if your cheeks were not so red. And that puts me in mind! Let us make an image out of snow,--an image of a little girl,--and it shall be our sister, and shall run about and play with us all winter long. Won't it be nice?"

"Oh yes!" cried Peony, as plainly as he could speak, for he was but a little boy. "That will be nice! And mamma shall see it!"

"Yes," answered Violet; "mamma shall see the new little girl. But she must not make her come into the warm parlor; for, you know, our little snow-sister will not love the warmth."

And forthwith the children began this great business of making a snow-image that should run about; while their mother, who was sitting at the window and overheard some of their talk, could not help smiling at the gravity with which they set about it. They really seemed to imagine that there would be no difficulty whatever in creating a live little girl out of the snow. And, to say the truth, if miracles are ever to be wrought, it will be by putting our hands to the work in precisely such a simple and undoubting frame of mind as that in which Violet and Peony now undertook to perform one, without so much as knowing that it was a miracle....