The Slave of the Lamp 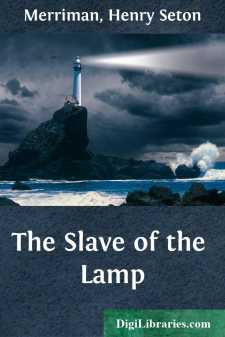 Henry Seton Merriman published his first novel, "Young Mistley," in 1888, when he was twenty-six years old. Messrs. Bentley's reader, in his critique on the book, spoke of its "powerful situations" and unconventionality of treatment: and, while dwelling at much greater length on its failings, declared, in effect, its faults to be the right faults, and added that, if "Young Mistley" was not in itself a good novel, its author was one who might hereafter certainly write good novels.

"Young Mistley" was followed in quick succession by "The Phantom Future," "Suspense," and "Prisoners and Captives." Some years later, considering them crude and immature works, the author, at some difficulty and with no little pecuniary loss, withdrew all these four first books from circulation in England. Their republication in America he was powerless to prevent. He therefore revised and abbreviated them, "conscious," as he said himself in a preface, "of a hundred defects which the most careful revision cannot eliminate." He was perhaps then, as he was ever, too severe a critic of his own works. But though these four early books have, added to youthful failings, the youthful merits of freshness, vigour and imagination, their author was undoubtedly right to suppress them. By writing them he learnt, it is true, the technique of his art: but no author wishes—or no author should wish—to give his copy-books to the world. It is as well then—it is certainly as he himself desired—that these four books do not form part of the present edition. It may, however, be noted that both "Young Mistley" and "Prisoners and Captives" dealt, as did "The Sowers" hereafter, with Russian subjects: "Suspense" is the story of a war-correspondent in the Russo-Turkish War of 1877: and "The Phantom Future" is the only novel of Merriman's in which the scene is laid entirely in his own country.

In 1892 he produced "The Slave of the Lamp," which had run serially through the Cornhill Magazine, then under the editorship of Mr. James Payn.

To Mr. Payn, Merriman always felt that he owed a debt of gratitude for much shrewd and kindly advice and encouragement. But one item of that advice he neglected with, as Mr. Payn always generously owned, great advantage. Mr. Payn believed that the insular nature of the ordinary Briton made it, as a general rule, highly undesirable that the scene of any novel should be laid outside the British Isles.

After 1892 all Merriman's books, with the single exception of "Flotsam," which appeared serially in Longman's Magazine, and was, at first, produced in book form by Messrs. Longman, were published by the firm of Messrs. Smith, Elder, & Co.

His long and serene connection with the great and honourable house which had produced the works of such masters of literature as Thackeray, Charlotte Bronte, and Robert Browning, was always a source of sincere pleasure to him. He often expressed the opinion that, from the moment when, as an inexperienced and perfectly unknown author, he sent "Young Mistley" to Messrs. Bentley, until the time when, as a very successful one, he was publishing his later novels with Messrs. Smith, Elder, he had invariably received from his publishers an entirely just and upright treatment.

Also in 1892 he produced "From One Generation to Another": and, two years later, the first of his really successful novels, "With Edged Tools." It is the only one of his books of which he never visited the mise-en-scène—West Africa: but he had so completely imbued himself with the scenery and the spirit of the country that few, if any, of his critics detected that he did not write of it from personal experience....