The Sky Pilot in No Man's Land 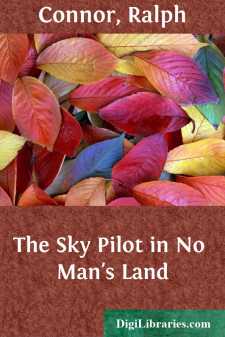 CHAPTER I ONLY A MISSIONARY

High upon a rock, poised like a bird for flight, stark naked, his satin skin shining like gold and silver in the rising sun, stood a youth, tall, slim of body, not fully developed but with muscles promising, in their faultless, gently swelling outline, strength and suppleness to an unusual degree. Gazing down into the pool formed by an eddy of the river twenty feet below him, he stood as if calculating the distance, his profile turned toward the man who had just emerged from the bushes and was standing on the sandy strand of the river, paddle in hand, looking up at him with an expression of wonder and delight in his eyes.

"Ye gods, what a picture!" said the man to himself.

Noiselessly, as if fearing to send the youth off in flight, he laid his paddle on the sand, hurriedly felt in his pockets, and swore to himself vigorously when he could find no sketch book there.

"What a pose! What an Apollo!" he muttered.

The sunlight glistening on the beautiful white skin lay like pools of gold in the curving hollows of the perfectly modelled body, and ran like silver over the rounded swellings of the limbs. Instinct with life he seemed, something in his pose suggesting that he had either alighted from the golden, ambient air, or was about to commit himself to it. The man on the sand continued to gaze as if he were beholding a creature of another world.

Slowly the youth began to move his arms up to the horizontal, then to the perpendicular, reaching to the utmost of his height upon his toe tips, breathing deep the while. Smoothly, slowly, the muscles in legs and thighs, in back, in abdomen, in chest, responding to the exercise moved under the lustrous skin as if themselves were living things. Over and over again the action was repeated, the muscles and body moving in rhythmic harmony like some perfect mechanism running in a bath of oil.

"Ye gods of Greece!" breathed the man. "What is this thing I see? Flesh or spirit? Man or god?" Again he swore at himself for neglecting to bring his sketch book and pencil.

"Hello, father! Where are you?" A girl's voice rang out, high, clear, and near at hand.

"Good Lord!" said the man to himself, glancing up at the poised figure. "I must stop her."

One startled glance the youth flung down upon him, another in the direction of the voice, then, like a white, gleaming arrow he shot down, and disappeared in the dark pool below.

With his eyes upon the water the man awaited his reappearing. A half minute, a full minute he waited, but in vain. Swiftly he ran toward the edge of the pool. There was no sign anywhere of the youth.

Ghastly pale and panting, the man ran, as far round the base of the rock as the water would allow him, seeking everywhere signs of the swimmer.

"Hello, father! Oh, there you are!" Breaking through the bushes, a girl ran to him.

"Good heavens! he was there!" gasped the man, pointing to the high rock. "He plunged in there." He pointed to the pool....