The Sky Pilot, a Tale of the Foothills 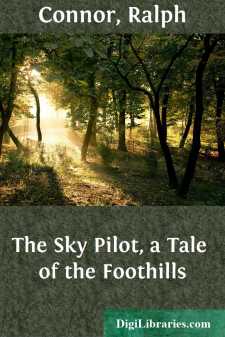 CHAPTER I THE FOOTHILLS COUNTRY

Beyond the great prairies and in the shadow of the Rockies lie the Foothills. For nine hundred miles the prairies spread themselves out in vast level reaches, and then begin to climb over softly rounded mounds that ever grow higher and sharper till, here and there, they break into jagged points and at last rest upon the great bases of the mighty mountains. These rounded hills that join the prairies to the mountains form the Foothill Country. They extend for about a hundred miles only, but no other hundred miles of the great West are so full of interest and romance. The natural features of the country combine the beauties of prairie and of mountain scenery. There are valleys so wide that the farther side melts into the horizon, and uplands so vast as to suggest the unbroken prairie. Nearer the mountains the valleys dip deep and ever deeper till they narrow into canyons through which mountain torrents pour their blue-gray waters from glaciers that lie glistening between the white peaks far away. Here are the great ranges on which feed herds of cattle and horses. Here are the homes of the ranchmen, in whose wild, free, lonely existence there mingles much of the tragedy and comedy, the humor and pathos, that go to make up the romance of life. Among them are to be found the most enterprising, the most daring, of the peoples of the old lands. The broken, the outcast, the disappointed, these too have found their way to the ranches among the Foothills. A country it is whose sunlit hills and shaded valleys reflect themselves in the lives of its people; for nowhere are the contrasts of light and shade more vividly seen than in the homes of the ranchmen of the Albertas.

The experiences of my life have confirmed in me the orthodox conviction that Providence sends his rain upon the evil as upon the good; else I should never have set my eyes upon the Foothill country, nor touched its strangely fascinating life, nor come to know and love the most striking man of all that group of striking men of the Foothill country—the dear old Pilot, as we came to call him long afterwards. My first year in college closed in gloom. My guardian was in despair. From this distance of years I pity him. Then I considered him unnecessarily concerned about me—"a fussy old hen," as one of the boys suggested. The invitation from Jack Dale, a distant cousin, to spend a summer with him on his ranch in South Alberta came in the nick of time. I was wild to go. My guardian hesitated long; but no other solution of the problem of my disposal offering, he finally agreed that I could not well get into more trouble by going than by staying. Hence it was that, in the early summer of one of the eighties, I found myself attached to a Hudson's Bay Company freight train, making our way from a little railway town in Montana towards the Canadian boundary. Our train consisted of six wagons and fourteen yoke of oxen, with three cayuses, in charge of a French half-breed and his son, a lad of about sixteen....