The Skipper's Wooing, and The Brown Man's Servant 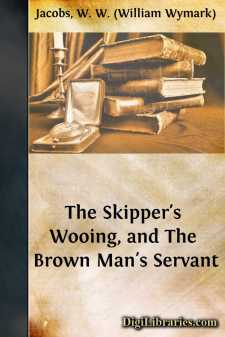 The schooner Seamew, of London, Captain Wilson master and owner, had just finished loading at Northfleet with cement for Brittlesea. Every inch of space was packed. Cement, exuded from the cracks, imparted to the hairy faces of honest seamen a ghastly appearance sadly out of keeping with their characters, and even took its place, disguised as thickening, among the multiple ingredients of a sea-pie that was cooking for dinner.

It was not until the decks were washed and the little schooner was once more presentable that the mate gave a thought to his own toilet. It was a fine, warm morning in May, and some of the cargo had got into his hair and settled in streaks on his hot, good-humored face. The boy had brought aft a wooden bucket filled with fair water, and placed upon the hatch by its side a piece of yellow soap and a towel. Upon these preparations the mate smiled pleasantly, and throwing off his shirt and girding his loins with his braces, he bent over and with much zestful splashing began his ablutions.

Twice did the ministering angel, who was not of an age to be in any great concern about his own toilet, change the water before the mate was satisfied; after which the latter, his face and neck aglow with friction, descended to the cabin for a change of raiment.

He did not appear on deck again until after dinner, which, in the absence of the skipper, he ate alone. The men, who had also dined, were lounging forward, smoking, and the mate, having filled his own pipe, sat down by himself and smoked in silence.

"I'm keeping the skipper's dinner 'ot in a small sorsepan, sir," said the cook, thrusting his head out of the galley.

"All right," said the mate.

"It's a funny thing where the skipper gets to these times," said the cook, addressing nobody in particular, but regarding the mate out of the corner of his eye.

"Very rum," said the mate, who was affably inclined just then.

The cook came out of the galley, and, wiping his wet hands on his dirty canvas trousers, drew near and gazed in a troubled fashion ashore.

"E's the best cap'n I ever sailed under," he said slowly. "Ain't it struck you, sir, he's been worried like these 'ere last few trips? I told 'im as 'e was goin' ashore as there was sea-pie for dinner, and 'e ses, 'All right, Joe' 'e ses, just as if I'd said boiled beef and taters, or fine mornin', sir, or anythink like that!"

The mate shook his head, blew out a cloud of smoke and watched it lazily as it disappeared.

"It strikes me as 'ow 'e'sarter fresh cargo or something," said a stout old seaman who had joined the cook. "Look 'ow 'e's dressing nowadays! Why, the cap'n of a steamer ain't smarter!"

"Not so smart, Sam," said the remaining seaman, who, encouraged by the peaceful aspect of the mate had also drawn near. "I don't think it's cargo he's after, though—cement pays all right."

"It ain't cargo," said a small but confident voice.

"You clear out!" said old Sam. "A boy o' your age shovin' his spoke in when 'is elders is talkin'! What next, I wonder!"