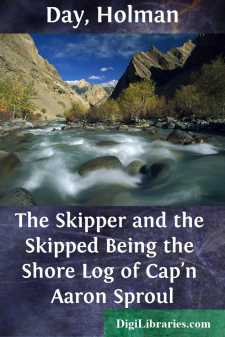 Cap'n Aaron Sproul, late skipper of the Jefferson P. Benn, sat by the bedside of his uncle, "One-arm" Jerry, and gazed into the latter's dimming eyes.

"It ain't bein' a crowned head, but it's honer'ble," pleaded the sick man, continuing the conversation.

His eager gaze found only gloominess in his nephew's countenance.

"One way you look at it, Uncle Jed," said the Cap'n, "it's a come-down swifter'n a slide from the foretop the whole length of the boomstay. I've been master since I was twenty-four, and I'm goin' onto fifty-six now. I've licked every kind in the sailorman line, from a nigger up to Six-fingered Jack the Portugee. If it wa'n't for—ow, Josephus Henry!—for this rheumatiz, I'd be aboard the Benn this minute with a marlinespike in my hand, and op'nin' a fresh package of language."

"But you ain't fit for the sea no longer," mumbled One-arm Jerry through one corner of the mouth that paralysis had drawn awry.

"That's what I told the owners of the Benn when I fit 'em off'm me and resigned," agreed the Cap'n. "I tell ye, good skippers ain't born ev'ry minute—and they knowed it. I've been turnin' 'em in ten per cent. on her, and that's good property. I've got an eighth into her myself, and with a man as good as I am to run her, I shouldn't need to worry about doin' anything else all my life—me a single man with no one dependent. I reckon I'll sell. Shipmasters ain't what they used to be."

"Better leave it where it is," counselled Jerry, his cautious thrift dominating even in that hour of death. "Land-sharks is allus lookin' out sharp for sailormen that git on shore."

"It's why I don't dast to go into business—me that's follered the sea so long," returned the skipper, nursing his aching leg.

"Then do as I tell ye to do," said the old man on the bed. "It may be a come-down for a man that's had men under him all his life, but it amounts to more'n five hundred a year, sure and stiddy. It's something to do, and you couldn't stand it to loaf—you that's always been so active. It ain't reskin' anything, and with all the passin' and the meetin' folks, and the gossipin' and the chattin', and all that, all your time is took up. It's honer'ble, it's stiddy. Leave your money where it is, take my place, and keep this job in the family."

The two men were talking in a little cottage at the end of a long covered bridge. A painted board above the door heralded the fact that the cottage was the toll-house, and gave the rates of toll.

"It's Providence that has sent you here jest as I was bein' took out of the world," went on Uncle Jerry. "You're my only rel'tive. I'm leavin' you the three thousand I've accumulated. I want to leave you the job, too. I—"

A hoarse hail outside interrupted. The Cap'n, scowling, shuffled out and came in, jingling some pennies in his brown hand.

"I feel like a hand-organ monkey every time I go out there," he muttered.

"I tell ye," protested the old man, as earnestly as his feebleness would permit, "there's lots of big business in this world that don't need so long a head as this one does—bein' as how you're goin' to run it shipshape....