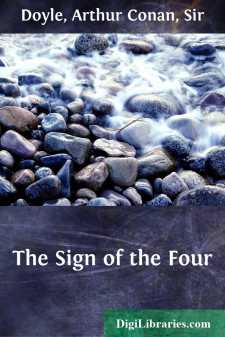 The Science of Deduction

Sherlock Holmes took his bottle from the corner of the mantel-piece and his hypodermic syringe from its neat morocco case. With his long, white, nervous fingers he adjusted the delicate needle, and rolled back his left shirt-cuff. For some little time his eyes rested thoughtfully upon the sinewy forearm and wrist all dotted and scarred with innumerable puncture-marks. Finally he thrust the sharp point home, pressed down the tiny piston, and sank back into the velvet-lined arm-chair with a long sigh of satisfaction.

Three times a day for many months I had witnessed this performance, but custom had not reconciled my mind to it. On the contrary, from day to day I had become more irritable at the sight, and my conscience swelled nightly within me at the thought that I had lacked the courage to protest. Again and again I had registered a vow that I should deliver my soul upon the subject, but there was that in the cool, nonchalant air of my companion which made him the last man with whom one would care to take anything approaching to a liberty. His great powers, his masterly manner, and the experience which I had had of his many extraordinary qualities, all made me diffident and backward in crossing him.

Yet upon that afternoon, whether it was the Beaune which I had taken with my lunch, or the additional exasperation produced by the extreme deliberation of his manner, I suddenly felt that I could hold out no longer.

He raised his eyes languidly from the old black-letter volume which he had opened. "It is cocaine," he said,—"a seven-per-cent. solution. Would you care to try it?"

"No, indeed," I answered, brusquely. "My constitution has not got over the Afghan campaign yet. I cannot afford to throw any extra strain upon it."

He smiled at my vehemence. "Perhaps you are right, Watson," he said. "I suppose that its influence is physically a bad one. I find it, however, so transcendently stimulating and clarifying to the mind that its secondary action is a matter of small moment."

"But consider!" I said, earnestly. "Count the cost! Your brain may, as you say, be roused and excited, but it is a pathological and morbid process, which involves increased tissue-change and may at last leave a permanent weakness. You know, too, what a black reaction comes upon you. Surely the game is hardly worth the candle. Why should you, for a mere passing pleasure, risk the loss of those great powers with which you have been endowed? Remember that I speak not only as one comrade to another, but as a medical man to one for whose constitution he is to some extent answerable."

He did not seem offended. On the contrary, he put his finger-tips together and leaned his elbows on the arms of his chair, like one who has a relish for conversation.

"My mind," he said, "rebels at stagnation. Give me problems, give me work, give me the most abstruse cryptogram or the most intricate analysis, and I am in my own proper atmosphere. I can dispense then with artificial stimulants....