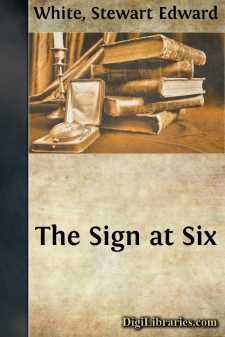 THE OWNER OF NEW YORK

Percy Darrow, a young man of scientific training, indolent manners, effeminate appearance, hidden energy, and absolute courage, lounged through the doors of the Atlas Building. Since his rescue from the volcanic island that had witnessed the piratical murder of his old employer, Doctor Schermerhorn, the spectacular dissolution of the murderers, and his own imprisonment in a cave beneath the very roar of an eruption, he had been nursing his shattered nerves back to their normal strength. Now he felt that at last he was able to go to work again. Therefore, he was about to approach a man of influence among practical scientists, from whom he hoped further occupation.

As the express elevator shot upward, he passed a long slender hand across his eyes. The rapid motion confused him still. The car stopped, and the metallic gates clanged open. Darrow obediently stepped forth. Only when the elevator had disappeared did his upward glance bring to him the knowledge that he had disembarked one floor too soon.

Darrow's eye fell on a lettered sign outside the nearest door. He smiled a slow red-lipped smile beneath his small silky mustache, drooped his black eyelashes in a flicker of reminiscence, hesitated a moment, then stepped languidly forward and opened the door. The sign indicated the headquarters of the very modest commissionership behind which McCarthy chose to work. McCarthy, quite simply, at that time owned New York.

As Darrow entered, McCarthy hung up the telephone receiver with a smash, and sat glaring at the instrument. After a moment he turned his small bright eyes toward the newcomer.

"Hello, Perc," he growled. "Didn't see you. Say, I'm so mad my skin cracks. Just now some measly little shrimp called me up from a public booth. What ye suppose he wanted, now? Oh, nothin'! Just told me in so many words for me to pack up my little trunk and sail for Europe and never come back! That's all! He give me until Sunday, too." McCarthy barked out a short laugh, and reached for the cigar box, which he held out to Darrow.

Percy shook his head. "What's the occasion?" he asked.

"So he wants you to go to Europe?"

"Wants me? Orders me! Says I got to." McCarthy laughed. "Lovely thought!"

He puffed out a cloud of smoke.

"Says if I don't obey orders he'll send me a 'sign' to convince me!" went on the boss. "He's got a mean voice. He ought to have a tag hung on him and get carried to the morgue. He give me the shivers, like a dead man. I never hear such a unholy thing outside a graveyard at midnight!"

Percy Darrow was surveying him with leisurely amusement, a slight smile playing over his narrow dark face.

"Talking to get back your nerve," he surmised cheerfully to the usually taciturn boss. "I'd like to know what it was got you going so; it isn't much your style."

"Well, you got yours with you," growled McCarthy, shifting for the first time from his solid attitude of the bulldog at bay.