The Siege of Kimberley 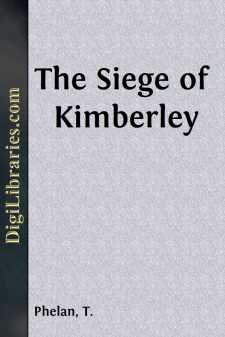 The famous Ultimatum had gone forth to the world. War had come at last. We, in Kimberley, were in for it—though happily unconscious of our destiny until it was revealed by the gradations of time. Nothing awful was anticipated. The future was veiled. The knowledge of what was to come was brought home to us by a gradual process that kept us permanently sane. Dull Kimberley was to be enlivened in a manner that made us wish it were dull again. We felt it from the first—the sense of imprisonment—the deprivation of liberty. But that was all, we thought—all that we should be called to endure. Nobody could leave Kimberley for a little while; it was awkward, certainly; but nothing more. How long would the Siege last? "About a week" was a favoured illusion; until reflective minds put our period of probation at a fortnight. But the higher critics shook their heads, and added—another seven days. Three weeks was made the maximum by general, dogmatic consent. Nobody ventured beyond it; in fact, nobody dared to. Suspicion would be apt to fall upon the man who suggested a month. Feeling ran high, and as we all felt the limits of our confinement narrow enough already, we entertained no wish to have them made narrower still, by knocking our heads against the stone walls of the gaol. Not then. There came a time, alas! when we reflected with a sigh upon the probability of our rations being more regular and assured if we broke a window, or the law in some way, and gave ourselves up. For the nonce, however, three weeks would pass, and with them all our woes. The idea of eighteen weeks occurred to nobody; it would have been too farcical, too puerile. That starvation must have killed us long ere the period had fled, would have been our axiom, if it were pertinent to the issue, when the 'pros' and 'cons' of the situation were being eagerly discussed on the opening days of a Siege that was to send the fame of the Diamond City farther than ever did its diamonds. A few weeks would terminate the trouble; and if, in the interim, we ran short of trifles, like salt or pepper, well—we would bear it for sake of the Flag. Kimberley is a British stronghold, with a loyal population imbued with a fine sense of the invincibility of the British army. Many people were surprised to find that they could descant sincerely and patriotically upon the might and glories of the Empire. Even the Irish Nationalist seemed to feel that it took a nation upon whose territory the sun itself could not set to subjugate his native land; and he was moved to remind his Anglo-Saxon mates that the absent-minded beggars of the Emerald Isle had contributed to the promotion of daytime all night.

The Diamond City was in certain respects well adapted to withstand a siege. The old residents delighted to call it a city. Newcomers, who had Continental ideas on the subject, inclined to think the term a misnomer, and a reflection upon Europe and America. But although its buildings were not high, nor its houses very majestic, Kimberley was a rich place, and a large place, with a good white population and a better coloured one. It had its theatre, and it had its Mayor. Arrogant greenhorns were soon made to cease winking when we talked of the "city"; for Kimberley was a city (after a fashion), and the most important centre in the Cape Colony. The young Uitlander (just out) who described it as "a funny place, dear mother; all the houses are made of tin, and all the dogs are called 'voet sak,'" was more cynical than truthful.

The numerous debris heaps surrounding the city made excellent fortifications, and it was not surprising that the Boers put, and kept, on view the better part of their valour only, when from their own well-chosen positions they looked across at our clay Kopjes. To have attacked or taken Kimberley, they would have been obliged to traverse a flat, open country; and they have an intelligent antipathy to rash tactics of that sort, when fighting a foe numerically stronger than themselves. They were reputed to believe that Providence was on their side; it was even stated that their ardour to "rush" Kimberley knew no bounds, until it was cooled by the restraining influence of General Cronje. That astute leader, though fully cognisant of the virtues of his people, had a respect for "big battalions," and thought that the virtue designated patience would best meet the necessities of the situation. Accordingly, he and his army, well primed with coffee, lay entrenched around Kimberley, in the fond hope of starving us into submission. Artillery of heavy calibre was utilised to enliven the process—with what result the world knows....