The Siege of Boston 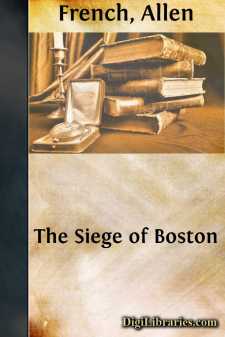 CHAPTER I BEGINNINGS AND CONDITIONS

The Siege of Boston was the culmination of a series of events which will always be of importance in the history of America. From the beginning of the reign of George the Third, the people of the English colonies in the new world found themselves at variance with their monarch, and nowhere more so than in Massachusetts. Since the New England people were fitted by their temperament and history to take the lead in the struggle, at their chief town naturally took place the more important incidents. These, which were often dramatic, had nevertheless a political cause and significance which link them in a rising series that ended in a violent outbreak and the eleven months' leaguer.

As to the siege itself, it varies an old situation, for Boston was beset by its own neighbors in defence of the common rights. Previously the king's troops, though regarded as invaders, had been but half-hearted oppressors; it was the people themselves who persistently provoked difficulties. The siege proper is of striking military interest, for its hostilities begin by the repulse of an armed expedition into a community of farmers, continue with a pitched battle between regular troops and a militia, produce a general of commanding abilities, and end with a strategic move of great skill and daring. It is the first campaign of a great war, and precedes the birth of a nation. Politically, the cause of the struggle is of enduring consequence to mankind. Socially, the siege and its preliminaries bring to view people of all kinds, some weak, some base, some picturesque, some entirely admirable. The period shows the breaking up of an old society and the formation of a new. A study of the siege is therefore of value.

It will be observed that the siege cannot satisfactorily be considered as a distinct series of military or semi-military events, abruptly beginning and still more abruptly ending. Such a view would reduce the siege to a mere matter of local history, having little connection with the larger movements of the American Revolution, and appearing almost as an accident which might have happened at any other centre of sufficient population.[1] On the contrary, neither the siege nor the Revolution were accidents of history. That the Revolution was bound to come about, and that its beginnings were equally bound to be at Boston, these were conditioned in the nature, first of the colonists in general, and second of the New Englanders in particular. However striking were certain of the occurrences, they were of less importance than their causes and consequences.

Accordingly I shall consider as an organic series the more important of those events which happened in Boston during the reign of George the Third, and which ended when the last of his redcoats departed from the town. In fact, in order to be perfectly intelligible I must first devote a few pages to a consideration of previous conditions.

"Any one," wrote George E. Ellis in the "Memorial History of Boston,"[2] "who attempts to trace the springs, the occasions, and the directing forces of the revolt … cannot find his clew a year short of the date when the former self-governed Colony of Massachusetts Bay became a Royal Province." He is right in pointing out that in 1692 the struggle took open form....