The Ship Dwellers A Story of a Happy Cruise 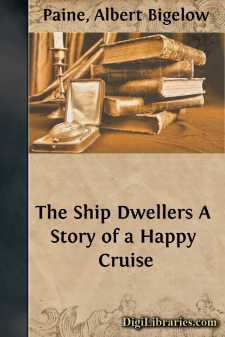 THE BOOK, AND THE DREAM

It was a long time ago—far back in another century—that my father brought home from the village, one evening, a brand-new book. There were not so many books in those days, and this was a fine big one, with black and gilt covers, and such a lot of pictures!

I was at an age to claim things. I said the book was my book, and, later, petitioned my father to establish that claim. (I remember we were climbing through the bars at the time, having driven the cows to the further pasture.)

My father was kindly disposed, but conservative; that was his habit. He said that I might look at the book—that I might even read it, some day, when I was old enough, and I think he added that privately I might call it mine—a privilege which provided as well for any claim I might have on the moon.

I don't think these permissions altogether satisfied me. I was already in the second reader, and the lust of individual ownership was upon me. Besides, this was a New Pilgrim's Progress. We had respect in our house for the old Pilgrim's Progress, and I had been encouraged to search its pages. I had read it, or read at it, for a good while, and my claim of ownership in that direction had never been disputed. Now, here was a brand-new one, and the pictures in it looked most attractive. I was especially enamoured of the frontispiece, "The Pilgrim's Vision," showing the "Innocents" on their way "abroad," standing on the deck of the Quaker City and gazing at Bible pictures in the sky.

I do not remember how the question of ownership settled itself. I do remember how the book that winter became the nucleus of our family circle, and how night after night my mother read aloud from it while the rest of us listened, and often the others laughed.

TO ME IT WAS ALL TRUE, ALL ROMANCE—ALL POETRY

I did not laugh—not then. In the first place, I would not, in those days, laugh at any Pilgrim's Progress, especially at a new one, and then I had not arrived at the point of sophistication where a joke, a literary joke, registers. To me it was all true, all romance—all poetry—the story of those happy voyagers who sailed in a ship of dreams to lands beyond the sunrise, where men with turbans, long flowing garments and Bible whiskers rode on camels; where ruined columns rose in a desert that was once a city; where the Sphinx and the Pyramids looked out over the sands that had drifted about them long and long before the Wise Men of the East had seen the Star rise over Bethlehem.

In the big, bleak farm-house on the wide, bleak Illinois prairie I looked into the open fire and dreamed. Some day, somehow, I would see those distant lands. I would sail away on that ship with "Dan" and "Jack" and "The Doctor" to the Far East; I would visit Damascus and Jerusalem, and pitch my camp on the borders of the Nile. Very likely I should decide to remain there and live happy ever after.

How the dreams of youth stretch down the years, and fade, and change! Only this one did not fade, and I thought it did not change....