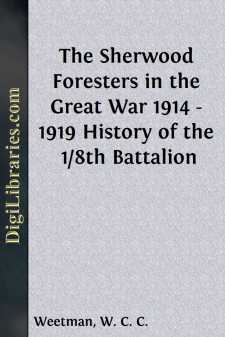 It is not only a great honour to have been asked to write an introduction to this book, but it is a real pleasure to me to be linked in this manner to a Battalion with which I was so intimately connected for nearly six years and in which I made so many friends, of whom many, alas, have passed the "great divide."

The Battalion has been lucky in finding in Capt. Weetman an author with such a ready and amusing pen, and one especially who was in a position to see the workings of the Battalion in almost every phase of its career and from every standpoint, first as a Company Officer, then as Adjutant and finally from Brigade Headquarters.

To me, perhaps naturally, the most interesting part of the book is the early chapters. From the time, in 1911, when I took over the command of what, I was informed by a Staff Officer qualified to know, was the best Territorial Brigade in the Kingdom, I was a firm believer in the Territorial Force. But I hardly think that the most hardened optimist would at that time have thought it possible for a Territorial Division to mobilise and march complete with equipment and Transport to its Mobilisation area on the sixth day after receiving the order "Mobilise." The amount of work done by Battalions and Companies was marvellous and only those who experienced it can have an idea of what it meant.

As for the Training, I don't believe better work was ever done than during those weeks at Harpenden. True we were lucky in the weather and in the Training area, and the 8th Battalion were specially lucky in their excellent staff of Sergeant-Instructors. All ranks put their heart into the work. I remember particularly the excellent work done by the large batch of recruits which joined the Battalion at that time, including surely as good a lot of young Officers as ever joined a regiment. The author has described fully the training carried out at Harpenden and in Essex, and that the time and labour spent in it were not wasted is proved by the manner in which all ranks so quickly took on their responsibilities in the trenches, and with such success. That the Territorial Force was in many ways neglected by the Higher Authorities during those early days is well known, but that the Force amply justified itself is proved by its actions and was fully recognised by those General Officers under whose command it came. The following extract from a speech made by Lieut-General Sir C. Fergusson, Commanding II Corps, to the Brigade at Locre, when it left his command, is worth recording to show the high opinion he held of our work in front of Kemmel. "No Battalion," he said, "and no Brigade could have held the lines better than you have done or have done better work than you have done.... Your work during the last three months is work of which any Brigade and any Battalion might be proud." No higher praise could have been given to any troops by an officer of such standing and repute.

I have written rather at length on this period for I consider the metamorphosis of a Territorial Battalion into as fine a fighting Battalion as ever took the field, is well worth the study of all those who have joined since those days or will join in the future....