The Shepherd Psalm A Meditation 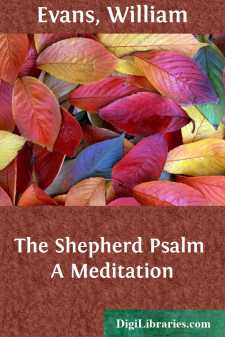 The world could afford to spare many a magnificent library better than it could dispense with this little Psalm of six verses. If the verses of this Psalm had tongues and could repeat the tale of their ministry down throughout the generations of the faithful, what marvels of experience they would reveal! Their biographies would be gathered from the four winds of heaven and from the uttermost parts of the sea; from lonely chambers, from suffering sick beds, from the banks of the valley of the shadow of death, from scaffolds and fiery piles; witnessing in sunlight from moors and mountains, beneath the stars and in high places of the field. What hosts of armies of aliens it has put to flight! If by some magic or divine touch, yea, some miraculous power, the saints' experience of this Psalm could shine out between its lines, what an illumination of the text there would be!

Luther was fond of comparing this Psalm to the nightingale, which is small among the birds and of homely plumage, but with what thrilling melody it pours out its beautiful notes! Into how many dungeons filled with gloom and doubt has this little Psalm sung its message of hope and faith! Into how many hearts, bruised and broken by grief, has it brought its hymn of comfort and healing How many darkened prison cells it has lightened and cheered! Into what thousands of sick rooms has it brought its ministry of comfort and support! How many a time, in the hour of pain, has it brought sustaining faith and sung its song of eternal bliss in the valley of the shadow of death! It has charmed more griefs to rest than all the philosophies of the world. And I am persuaded that this little Psalm-bird will continue to sing its song of comfort and cheer to your children, to my children, and to our children's children, and will not cease its psalmody of love until the last weary pilgrim has placed his last climbing footstep upon the threshold of the Father's house to go out no more. Then, I think, this little bird will fold its golden pinions and fall back on the bosom of God, from whence it came.

It has been well said that this Psalm is the most perfect picture of happiness that ever was or ever can be drawn to represent that state of mind for which all alike sigh, and the want of which makes life a failure to most. It represents that heaven which is everywhere, if we could but interpret it, and yet almost nowhere because not many of us do.

How familiar this Psalm is the world over! Go where you will; inquire in every nation, tongue and tribe under heaven where the Bible is known, you will find this Psalm among the first scriptures learned and lisped by the little child at its mother's knee, and the last bit of inspired writ uttered in dying breath by the saintly patriarch.

This Psalm is so universal, says one, because it is so individual; it is so individual because it is so universal. As we read it, we are aware not only of the fact that we are listening to the experience of an Old Testament saint, but also that a voice comes speaking to us through the long centuries past—speaking to us in our own language, recounting our own experience, breathing out our own hopes.

The Davidic authorship of this Psalm has been questioned. We believe firmly that David is the writer; and yet a man feels as he reads the Psalm that it is so personal, so true to his own individual experience, that he could fain claim to have written it himself. It might seem as though the promises and precious things set forth in this Psalm lie beyond our reach; we have nothing to draw with, and the well is deep, but "one of like passions with ourselves has passed that way before and has left a cup to be let down, with His name and story written on the rim, and we may let that cup down into the well and draw a draught of the deep, refreshing water."

The Location of the Psalm

Have you ever noticed just where this Psalm is located?...