The Shadow On The Dial, and Other Essays 1909 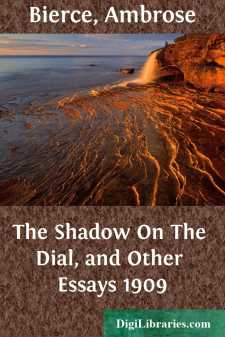 THE note of prophecy! It sounds sharp and clear in many a vibrant line, in many a sonorous sentence of the essays herein collected for the first time. Written for various Californian journals and periodicals and extending over a period of more than a quarter of a century, these opinions and reflections express the refined judgment of one who has seen, not as through a glass darkly, the trend of events. And having seen the portentous effigy that we are making of the Liberty our fathers created, he has written of it in English that is the despair of those who, thinking less clearly, escape not the pitfalls of diffuseness and obscurity. For Mr. Bierce, as did Flaubert, holds that the right word is necessary for the conveyance of the right thought and his sense of word values rarely betrays him into error. But with an odd—I might almost say perverse—indifference to his own reputation, he has allowed these writings to lie fallow in the old files of papers, while others, possessing the knack of publicity, years later tilled the soil with some degree of success. President Hadley, of Yale University, before the Candlelight Club of Denver, January 8, 1900, advanced, as novel and original, ostracism as an effective punishment of social highwaymen. This address attracted widespread attention, and though Professor Hadley's remedy has not been generally adopted it is regarded as his own. Mr. Bierce wrote in "The Examiner," January 20, 1895, as follows: "We are plundered because we have no particular aversion to plunderers."

The 'predatory rich' (to use Mr. Stead's felicitous term) put their hands into our pockets because they know that, virtually, none of us will refuse to take their hands in our own afterwards, in friendly salutation. If notorious rascality entailed social outlawry the only rascals would be those properly—and proudly—belonging to the 'criminal class.'

Again, Edwin Markham has attracted to himself no little attention by advocating the application of the Golden Rule in temporal affairs as a cure for evils arising from industrial discontent In this he, too, has been anticipated. Mr. Bierce, writing in "The Examiner," March 25, 1894, said: "When a people would avert want and strife, or having them, would restore plenty and peace, this noble commandment offers the only means—all other plans for safety and relief are as vain as dreams, and as empty as the crooning of fools. And, behold, here it is: 'All things whatsoever ye would that men should do to you, do ye even so to them.'"

Rev. Charles M. Sheldon created a nine days' wonder, or rather a seven, by conducting for a week a newspaper as he conceived Christ would have done. Some years previously, June 28, 1896, to be exact, the author of these essays wrote: "That is my ultimate and determining test of right—'What, under the circumstances, would Christ have done?'—the Christ of the New Testament, not the Christ of the commentators, theologians, priests and parsons."