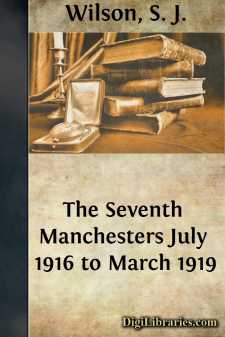 CHAPTER I. Holding up the Turk.

In September, 1914, the 7th Bn. Manchester Regiment set out for active service in the East in goodly company, for they were a part of the 42nd (East Lancashire) Division, the first territorials to leave these shores during the Great War. After many interesting days spent on garrison duty in the Sudan and Lower Egypt they journeyed to Gallipoli soon after the landing had been effected, and took a continuous part in that ill-fated campaign until the final evacuation. The beginning of 1916 thus found them back in Egypt, where they were taking part in General Maxwell's scheme for the defence of the Suez Canal. The things that befell the battalion during this long period have been admirably described in Major Hurst's book With Manchesters in the East, and this short history will attempt to continue the narrative from the point where it left off.

At the end of June, 1916, the 7th Manchesters made a short trip by rail along the Suez Canal, the last railway journey they were to make as a battalion for many a long day. The 42nd Division left the defence of the southern half of the Canal in the able hands of the East Anglian Territorials, and journeyed north to the Kantara region. It was not definitely known why we made this move, but there were persistent rumours that we were destined for France, where events were speeding towards a big battle. However, the 7th detrained at Kantara and there met, for the first time since Gallipoli, the 52nd (Lowland Scottish) Division. We knew very little of this coastal region of the desert. Occasional stories had floated down to us to supplement the very meagre official communiqués as to events there, but it was recognised as a place where opportunities of getting in touch with our invisible enemy were rather better than in the south. So it was felt that, even if we did not go to France, life would lose a certain amount of that deadly monotony which we had experienced for six months.

It transpired that the 127th Brigade were to relieve detachments of the 11th Division, who, it was openly whispered, were definitely to sail for France to try their luck in the more vigorous scene of this great adventure. Most interesting to us was the discovery that we were to take over posts occupied by the 11th Manchesters, the first Kitchener battalion of our own regiment. Our astonishment and delight can be imagined when we saw that they wore the good old Fleur de Lys for a battalion flash on the puggarees of their helmets—just as we wore it, but yellow instead of green.

The battalion marched east along a good road recently made for military purposes, and eventually reached Hill 70, where the headquarters were established. Early next morning, garrisons marched out before the heat of the day to occupy a series of posts arranged in semi-circular formation between two inundations about three miles apart. "B" Company took over Turk Top and No. 1 Post. Capt. Smedley, Capt. Brian Norbury, 2nd-Lt. C. B. Douglas, 2nd-Lt. Pell-Ilderton being at the former, while Capt. J. R. Creagh, 2nd-Lt. Hacker, and later 2nd-Lt. Gresty took charge of the latter. "C" Company were divided between Nos. 2 and 3 posts, with Lt. Nasmith and 2nd-Lt. S. J. Wilson at No. 2, and Lt. Nidd and Lt. Marshall at No. 3. "A" Company, who were responsible for Hill 70, was commanded by Capt. Tinker assisted by 2nd-Lt's. Kay, Woodward, Wood and Wilkinson. The officers comprising headquarters were Lt.-Col. Canning, C.M.G., Capt. Cyril Norbury (second in command), Major Scott (Quartermaster), Capt. Farrow, M.C. (Medical Officer), Lt. H. C. Franklin, M.C., Adjutant and 2nd-Lt. Bateman (Signal Officer), while 2nd-Lt. J. Baker was in charge of the Lewis guns of the battalion. "D" Company were at Hill 40 in a reserve position under the command of Capt. Higham supported by Capt. Townson, 2nd-Lt's. Grey Burn, G. W. F. Franklin, Ross-Bain, Gresty, Morten, and R. J. R. Baker. The work of the transport was divided between Capt. Ward-Jones, and 2nd-Lt. M. Norbury.

The posts consisted of self-contained redoubts which were capable of holding out in the matter of food and water for about three days. They had been constructed at the cost of great labour by the 52nd Division. Routine was simple, our only duties being to man our posts before dawn, then improve and maintain the trenches and wire until about 7 when the sun entered his impossible stage. The same thing happened in the evening. During the night patrols were executed from one post to the next. All this carried a certain interest because we knew that the Turk might come near at any time in the shape of a flying raiding column to reach the canal....