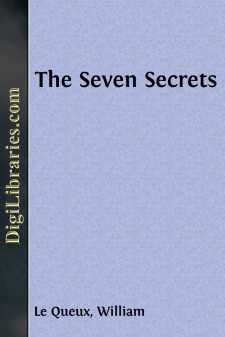 “Ah! You don’t take the matter at all seriously!” I observed, a trifle annoyed.

“Why should I?” asked my friend, Ambler Jevons, with a deep pull at his well-coloured briar. “What you’ve told me shows quite plainly that you have in the first place viewed one little circumstance with suspicion, then brooded over it until it has become magnified and now occupies your whole mind. Take my advice, old chap, and think nothing more about it. Why should you make yourself miserable for no earthly reason? You’re a rising man—hard up like most of us—but under old Eyton’s wing you’ve got a brilliant future before you. Unlike myself, a mere nobody, struggling against the tide of adversity, you’re already a long way up the medical ladder. If you climb straight you’ll end with an appointment of Physician-in-Ordinary and a knighthood thrown in as makeweight. Old Macalister used to prophesy it, you remember, when we were up at Edinburgh. Therefore, I can’t, for the life of me, discover any cause why you should allow yourself to have these touches of the blues—unless it’s liver, or some other internal organ about which you know a lot more than I do. Why, man, you’ve got the whole world before you, and as for Ethelwynn——”

“Ethelwynn!” I ejaculated, starting up from my chair. “Leave her out of the question! We need not discuss her,” and I walked to the mantelshelf to light a fresh cigarette.

“As you wish, my dear fellow,” said my merry, easy-going friend. “I merely wish to point out the utter folly of all this suspicion.”

“I didn’t suggest that.” Then, after a pause during which he smoked on vigorously, he suddenly asked, “Well now, be frank, Ralph, whom do you really suspect?”

I was silent. Truth to tell, his question entirely nonplussed me. I had suspicions—distinct suspicions—that certain persons surrounding me were acting in accord towards some sinister end, but which of those persons were culpable I certainly could not determine. It was that very circumstance which was puzzling me to the point of distraction.

“Ah!” I replied. “That’s the worst of it. I know that the whole affair seems quite absurd, but I must admit that I can’t fix suspicion upon anyone in particular.”

“In that case, my dear Boyd, you ought really to see the folly of the thing.”

“Perhaps I ought, but I don’t,” I answered, facing him with my back to the fire. “To you, my most intimate friend, I’ve explained, in strictest confidence, the matter which is puzzling me. I live in hourly dread of some catastrophe the nature of which I’m utterly at a loss to determine. Can you define intuition?”

My question held him in pensive silence. His manner changed as he looked me straight in the face. Unlike his usual careless self—for his was a curious character of the semi-Bohemian order and Savage Club type—he grew serious and thoughtful, regarding me with critical gaze after removing his pipe from his lips.

“Well,” he exclaimed at last. “I’ll tell you what it is, Boyd. This intuition, or whatever you may call it, is an infernally bad thing for you. I’m your friend—one of your best and most devoted friends, old chap—and if there’s anything in it, I’ll render you whatever help I can.”

“Thank you, Ambler,” I said gratefully, taking his hand. “I have told you all this to-night in order to enlist your sympathy, although I scarcely liked to ask your aid. Your life is a busy one—busier even than my own, perhaps—and you have no desire to be bothered with my personal affairs.”

“On the contrary, old fellow,” he said. “Remember that in mystery I’m in my element.”

“I know,” I replied. “But at present there is no mystery—only suspicion.”

What Ambler Jevons had asserted was a fact. He was an investigator of mysteries, making it his hobby just as other men take to collecting curios or pictures. About his personal appearance there was nothing very remarkable. When pre-occupied he had an abrupt, rather brusque manner, but at all other times he was a very easy-going man of the world, possessor of an ample income left him by his aunt, and this he augmented by carrying on, in partnership with an elder man, a profitable tea-blending business in Mark Lane.

He had entered the tea trade not because of necessity, but because he considered it a bad thing for a man to lead an idle life....