The Seven Plays in English Verse 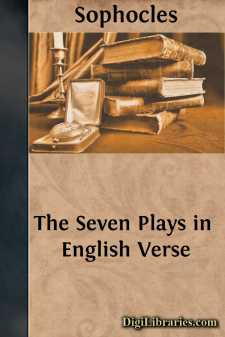 In 1869, having read the Antigone with a pupil who at the time had a passion for the stage, I was led to attempt a metrical version of the Antigone, and, by and by, of the Electra and Trachiniae. I had the satisfaction of seeing this last very beautifully produced by an amateur company in Scotland in 1877; when Mrs. Fleeming Jenkin may be said to have ‘created’ the part of Dêanira. Thus encouraged, I completed the translation of the seven plays, which was published by Kegan Paul in 1883 and again by Murray in 1896. I have now to thank Mr. Murray for consenting to this cheaper issue.

The seven extant plays of Sophocles have been variously arranged. In the order most frequently adopted by English editors, the three plays of the Theban cycle, Oedipus Tyrannus, Oedipus Coloneus, and Antigone, have been placed foremost.

In one respect this is obviously convenient, as appearing to present continuously a connected story. But on a closer view, it is in two ways illusory.

1. The Antigone is generally admitted to be, comparatively speaking, an early play, while the Oedipus Coloneus belongs to the dramatist’s latest manner; the first Oedipus coming in somewhere between the two. The effect is therefore analogous to that produced on readers of Shakespeare by the habit of placing Henry VI after Henry IV and V. But tragedies and ‘histories’ or chronicle plays are not in pari materia.

2. The error has been aggravated by a loose way of speaking of ‘the Theban Trilogy’, a term which could only be properly applicable if the three dramas had been produced in the same year. I have therefore now [page xii] arranged the seven plays in an order corresponding to the most probable dates of their production, viz. Antigone, Aias, King Oedipus, Electra, Trachiniae, Philoctetes, and Oedipus at Colonos. A credible tradition refers the Antigone to 445 B.C. The Aias appears to be not much later—it may even be earlier—than the Antigone. The Philoctetes was produced in 408 B.C., when the poet was considerably over eighty. The Oedipus at Colonos has always been believed to be a composition of Sophocles’ old age. It is said to have been produced after his death, though it may have been composed some years earlier. The tragedy of King Oedipus, in which the poet’s art attained its maturity, is plausibly assigned to an early year of the Peloponnesian war (say 427 B.C.), the Trachiniae to about 420 B.C. The time of the Electra is doubtful; but Professor Jebb has shown that, on metrical grounds, it should be placed after, rather than before, King Oedipus. Even the English reader, taking the plays as they are grouped in this volume, may be aware of a gradual change of manner, not unlike what is perceptible in passing from Richard II to Macbeth, and from Macbeth to The Winter’s Tale or Cymbeline. For although the supposed date of the Antigone was long subsequent to the poet’s first tragic victory, the forty years over which the seven plays are spread saw many changes of taste in art and literature....