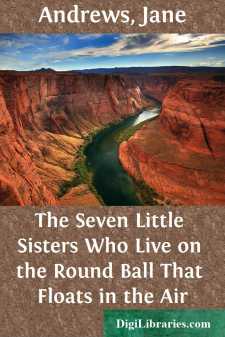 THE SEVEN LITTLE SISTERS. THE BALL ITSELF.

Dear children, I have heard of a wonderful ball, which floats in the sweet blue air, and has little soft white clouds about it, as it swims along.

There are many charming and astonishing things to be told of this ball, and some of them you shall hear.

In the first place, you must know that it is a very big ball; far bigger than the great soft ball, of bright colors, that little Charley plays with on the floor,—yes, indeed; and bigger than cousin Frank's largest football, that he brought home from college in the spring; bigger, too, than that fine round globe in the schoolroom, that Emma turns about so carefully, while she twists her bright face all into wrinkles as she searches for Afghanistan or the Bosphorus Straits. Long names, indeed; they sound quite grand from her little mouth, but they mean nothing to you and me now.

Let me tell you about my ball. It is so large that trees can grow on it; so large that cattle can graze, and wild beasts roam, upon it; so large that men and women can live on it, and little children too,—as you already know, if you have read the title-page of this book. In some places it is soft and green, like the long meadow between the hills, where the grass was so high last summer that we almost lost Marnie when she lay down to roll in it; in some parts it is covered with tall and thick forests, where you might wander like the "babes in the wood," nor ever find your way out; then, again, it is steep and rough, covered with great hills, much higher than that high one behind the schoolhouse,—so high that when you look up ever so far you can't see the tops of them; but in some parts there are no hills at all, and quiet little ponds of blue water, where the white water-lilies grow, and silvery fishes play among their long stems. Bell knows, for she has been among the lilies in a boat with papa.

Now, if we look on another side of the ball, we shall see no ponds, but something very dreary. I am afraid you won't like it. A great plain of sand,—sand like that on the seashore, only here there is no sea,—and the sand stretches away farther than you can see, on every side; there are no trees, and the sunshine beats down, almost burning whatever is beneath it.

Perhaps you think this would be a grand place to build sand-houses. One of the little sisters lives here; and, when you read of her, you will know what she thinks about it. Always the one who has tried it knows best.

Look at one more side of my ball, as it turns around. Jack Frost must have spent all his longest winter nights here, for see what a palace of ice he has built for himself. Brave men have gone to those lonely places, to come back and tell us about them; and, alas! some heroes have not returned, but have lain down there to perish of cold and hunger. Doesn't it look cold, the clear blue ice, almost as blue as the air? And look at the snow, drifts upon drifts, and the air filled with feathery flakes even now.

We won't look at this side longer, but we shall come back again to see Agoonack in her little sledge....