The Settlement of Wage Disputes 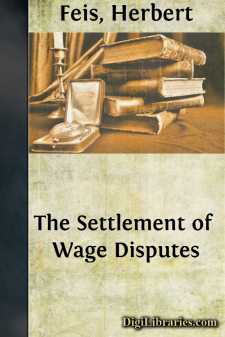 Section 1. In any attempt to formulate principles for use in the settlement of wage disputes, past experience furnishes much guidance. What this experience consists of.—Section 2. Such principles as have been used in the settlement of wage disputes have usually resulted from compromise; reason and economic analysis have usually been secondary factors. However, industrial peace cannot be secured by a recurrent use of expedients.—Section 3. The attitude most favorable to industrial peace.

1.—The industrial life of the United States is marked by an almost continuous series of open struggles between the employers and wage earners of its highly organized industries. No one defends these struggles for their own sake. There is a general inclination, however, to regard them as a necessary accompaniment of industrial activity and change. It must not be supposed that all labor troubles are merely wage controversies—that is to say, that they are all incidental to the settlement of the wage incomes of the laborers. Many of them arise in whole or part from a shifting and conflict of ideas about various other aspects of the industrial order. It is possible, however, to concentrate attention upon those conflicts which center around the settlement of wages.

There is a quick and somewhat tumultuous stream of investigation directed to the invention and formulation of principles which could be used as a basis of settlement of wage controversies. In various countries such principles have been formally set forth and used. The awards of the War Labor Board are an example of their imperfect application. In the Industrial Court of the Commonwealth of Australia we have an example of the consistent use of one set of wage principles. The material that has arisen out of this process of discussion and experimentation is of the utmost value to any one endeavoring to work out a wage policy for industrial peace in the United States. It forms a body of doctrines. It gives evidence both as to the chief subjects of wage controversy, and indicates the suitability or the shortcomings of many of the principles or doctrines that might be proposed. Thus in any investigation of principles of wage settlement—with a view to industrial peace—we are not without the guidance of experience.

This experience consists, firstly, of the principles worked out and applied in the decisions and orders of the courts or boards which have served as agents of wage settlement in the United States, England, Canada and the Australian dominions. Of almost equal value is the material growing out of those great industrial conflicts of recent years, in which claims have been put forward and agreement has been sought on the basis of some definite theory of wages. Such, for example, is the material prepared and presented in the course of the railway wage arbitrations in the United States and England. Such also is the evidence and material presented in the course of the inquiry recently held in Great Britain upon the wages of transport workers.

2.—It should be understood that the principles which have been used in wage settlements in the past were not ideal solutions. That is to say they were not arrived at solely by the use of reason, directed to the discovery of what is just and what is for the general good. The situation has been rather that described by Mr. Squires, when he writes: "Too often in the past arbitration has followed the line of least resistance. With much unction, the lion's share has been awarded to the lion. Decisions proposing another settlement were speedily forgotten because not enforced. Those submitting to arbitration frequently did so with the mental reservation that the decision to be acceptable must at least approximate the conditions they felt they would be able to establish by a show of strength. From this position to one of complacent acceptance of arbitrary decisions, applied not to an isolated group but seeking to comprehend all labor or a given class, is a long step for both employers and employees." And again: "In arbitrary wage adjustments the absence of well defined and acceptable standards to be used in wage determination as well as the difficulty in enforcing awards that did not conform closely to the law of supply and demand has forced arbitration to resort to the expediency of splitting the difference....