The Secrets of Potsdam 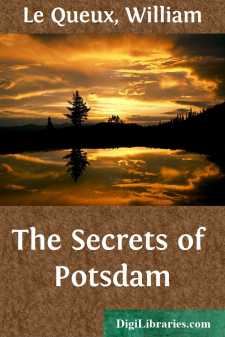 THE TRAGEDY OF THE LEUTENBERGS

You will recollect our first meeting on that sunny afternoon when, in the stuffy, nauseating atmosphere of perspiration and a hundred Parisian perfumes, we sat next each other at the first roulette table on the right as you enter the rooms at Monte Carlo?

Ah! how vivid it is still before my eyes, the jingle of gold and the monotonous cries of the croupiers.

Ah! my dear friend! In those pre-war days the Riviera—that sea-lapped Paradise, with its clear, open sky and sapphire Mediterranean, grey-green olives and tall flowering aloes, its gorgeous blossoms, and its merry, dark-eyed populace who lived with no thought of the morrow—was, indeed, the playground of Europe.

And, let me whisper it, I think I may venture to declare that few of its annual habitués enjoyed the life more than your dear old ink-stained self.

What brought us together, you, an English novelist, and I a—well, how shall I describe myself? One of your enemies—eh? No, dear old fellow. Let us sink all our international differences. May I say that I, Count Ernst von Heltzendorff, of Schloss Heltzendorff, on the Mosel, late personal-adjutant to His Imperial Highness the Crown-Prince, an official attached to that precious young scoundrel's immediate person, call you my dear friend?

True, our nations are, alas! at war—the war which the Kaiser and his son long sought, but which, as you well know, I have long ago detested.

I have repudiated that set of pirates and assassins of whom I was, alas! born, and among whom I moved until I learned of the vile plot afoot against the peace of Europe and the chastity of its female inhabitants.

On August 5th, 1914, I shook the dust of Berlin from my feet, crossed the French frontier, and have since resided in the comfortable old-fashioned country house which you assisted me to purchase on the border of the lovely forest of Fontainebleau.

And now, you have asked me to reveal to you some of the secrets of Potsdam—secrets known to me by reason of my official position before the war.

You are persuading me to disclose some facts concerning the public and private life of the Emperor, of my Imperial master the Crown-Prince, known in his intimate circle as "Willie," and of the handsome but long-suffering Cecil Duchess of Mecklenbourg, who married him ten years ago and became known as "Cilli." Phew! Poor woman! she has experienced ten years of misery, domestic unhappiness, by which she has become prematurely aged, deep-eyed, her countenance at times when we talked wearing an almost tragic look.

No wonder, indeed, that there is a heavy and, alas! broken heart within the beautiful Marble Palace at Potsdam, that splendid residence where you once visited me and were afterwards commanded to a reception held by His Imperial Highness.

I risk much, I know, in taking up my pen to tell the truth and to make these exposures to you, but I do so because I think it only just that your British nation should know the true character of the Emperor and of the unscrupulous and ubiquitous "Willie," the defiant young Blackguard of Europe, who is the idol of the swaggering German Army, and upon whom they pin their hopes.

It is true that the Commander of the Death's Head Hussars—the "Commander" who has since the war sanctioned the cold-blooded murder of women and children, the shooting of prisoners, rapine, incendiarism, and every other devil's work that his horde of assassins could commit—once declared that "the day will come when Social Democrats will come to Court."

True, he has been known to be present at the golden wedding festivities of a poor cobbler in Potsdam; that he has picked up in his yellow ninety-horse-power car—with its black imp as a mascot—a poor tramp and taken him to the hospital; and that he possesses the charming manner of his much-worshipped grandfather, the Emperor Frederick....