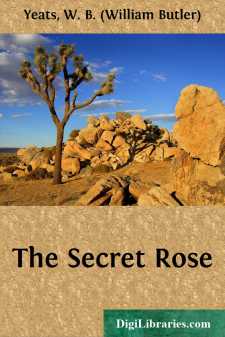 THE CRUCIFIXION OF THE OUTCAST.

A man, with thin brown hair and a pale face, half ran, half walked, along the road that wound from the south to the town of Sligo. Many called him Cumhal, the son of Cormac, and many called him the Swift, Wild Horse; and he was a gleeman, and he wore a short parti-coloured doublet, and had pointed shoes, and a bulging wallet. Also he was of the blood of the Ernaans, and his birth-place was the Field of Gold; but his eating and sleeping places where the four provinces of Eri, and his abiding place was not upon the ridge of the earth. His eyes strayed from the Abbey tower of the White Friars and the town battlements to a row of crosses which stood out against the sky upon a hill a little to the eastward of the town, and he clenched his fist, and shook it at the crosses. He knew they were not empty, for the birds were fluttering about them; and he thought how, as like as not, just such another vagabond as himself was hanged on one of them; and he muttered: 'If it were hanging or bowstringing, or stoning or beheading, it would be bad enough. But to have the birds pecking your eyes and the wolves eating your feet! I would that the red wind of the Druids had withered in his cradle the soldier of Dathi, who brought the tree of death out of barbarous lands, or that the lightning, when it smote Dathi at the foot of the mountain, had smitten him also, or that his grave had been dug by the green-haired and green-toothed merrows deep at the roots of the deep sea.'

While he spoke, he shivered from head to foot, and the sweat came out upon his face, and he knew not why, for he had looked upon many crosses. He passed over two hills and under the battlemented gate, and then round by a left-hand way to the door of the Abbey. It was studded with great nails, and when he knocked at it, he roused the lay brother who was the porter, and of him he asked a place in the guest-house. Then the lay brother took a glowing turf on a shovel, and led the way to a big and naked outhouse strewn with very dirty rushes; and lighted a rush-candle fixed between two of the stones of the wall, and set the glowing turf upon the hearth and gave him two unlighted sods and a wisp of straw, and showed him a blanket hanging from a nail, and a shelf with a loaf of bread and a jug of water, and a tub in a far corner. Then the lay brother left him and went back to his place by the door. And Cumhal the son of Cormac began to blow upon the glowing turf that he might light the two sods and the wisp of straw; but the sods and the straw would not light, for they were damp. So he took off his pointed shoes, and drew the tub out of the corner with the thought of washing the dust of the highway from his feet; but the water was so dirty that he could not see the bottom. He was very hungry, for he had not eaten all that day; so he did not waste much anger upon the tub, but took up the black loaf, and bit into it, and then spat out the bite, for the bread was hard and mouldy. Still he did not give way to his anger, for he had not drunken these many hours; having a hope of heath beer or wine at his day's end, he had left the brooks untasted, to make his supper the more delightful....