The Second Funeral of Napoleon 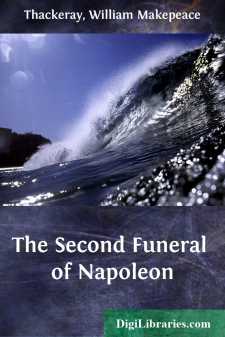 I.—ON THE DISINTERMENT OF NAPOLEON AT ST. HELENA.

MY DEAR ——,—It is no en the Voyage from St. Helena asy task in this world to distinguish between what is great in it, and what is mean; and many and many is the puzzle that I have had in reading History (or the works of fiction which go by that name), to know whether I should laud up to the skies, and endeavor, to the best of my small capabilities, to imitate the remarkable character about whom I was reading, or whether I should fling aside the book and the hero of it, as things altogether base, unworthy, laughable, and get a novel, or a game of billiards, or a pipe of tobacco, or the report of the last debate in the House, or any other employment which would leave the mind in a state of easy vacuity, rather than pester it with a vain set of dates relating to actions which are in themselves not worth a fig, or with a parcel of names of people whom it can do one no earthly good to remember.

It is more than probable, my love, that you are acquainted with what is called Grecian and Roman history, chiefly from perusing, in very early youth, the little sheepskin-bound volumes of the ingenious Dr. Goldsmith, and have been indebted for your knowledge of the English annals to a subsequent study of the more voluminous works of Hume and Smollett. The first and the last-named authors, dear Miss Smith, have written each an admirable history,—that of the Reverend Dr. Primrose, Vicar of Wakefield, and that of Mr. Robert Bramble, of Bramble Hall—in both of which works you will find true and instructive pictures of human life, and which you may always think over with advantage. But let me caution you against putting any considerable trust in the other works of these authors, which were placed in your hands at school and afterwards, and in which you were taught to believe. Modern historians, for the most part, know very little, and, secondly, only tell a little of what they know.

As for those Greeks and Romans whom you have read of in "sheepskin," were you to know really what those monsters were, you would blush all over as red as a hollyhock, and put down the history-book in a fury. Many of our English worthies are no better. You are not in a situation to know the real characters of any one of them. They appear before you in their public capacities, but the individuals you know not. Suppose, for instance, your mamma had purchased her tea in the Borough from a grocer living there by the name of Greenacre: suppose you had been asked out to dinner, and the gentleman of the house had said: "Ho! Francois! a glass of champagne for Miss Smith;"—Courvoisier would have served you just as any other footman would; you would never have known that there was anything extraordinary in these individuals, but would have thought of them only in their respective public characters of Grocer and Footman. This, Madam, is History, in which a man always appears dealing with the world in his apron, or his laced livery, but which has not the power or the leisure, or, perhaps, is too high and mighty to condescend to follow and study him in his privacy....