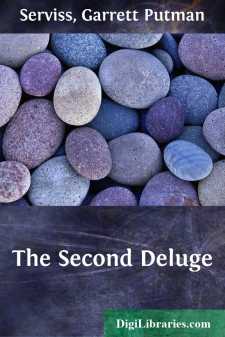 An undersized, lean, wizen-faced man, with an immense bald head, as round and smooth and shining as a giant soap-bubble, and a pair of beady black eyes, set close together, so that he resembled a gnome of amazing brain capacity and prodigious power of concentration, sat bent over a writing desk with a huge sheet of cardboard before him, on which he was swiftly drawing geometrical and trigonometrical figures. Compasses, T-squares, rulers, protractors, and ellipsographs obeyed the touch of his fingers as if inspired with life.

The room around him was a jungle of terrestrial and celestial globes, chemists' retorts, tubes, pipes, and all the indescribable apparatus that modern science has invented, and which, to the uninitiated, seems as incomprehensible as the ancient paraphernalia of alchemists and astrologers. The walls were lined with book shelves, and adorned along the upper portions with the most extraordinary photographs and drawings. Even the ceiling was covered with charts, some representing the sky, while many others were geological and topographical pictures of the face of the earth.

Beside the drawing-board lay a pad of paper, and occasionally the little man nervously turned to this, and, grasping a long pencil, made elaborate calculations, covering the paper with a sprinkling of mathematical symbols that looked like magnified animalcula. While he worked, under a high light from a single window placed well up near the ceiling, his forehead contracted into a hundred wrinkles, his cheeks became feverous, his piercing eyes glowed with inner fire, and drops of perspiration ran down in front of his ears. One would have thought that he was laboring to save his very soul and had but a few seconds of respite left.

Presently he threw down the pencil, and with astonishing agility let himself rapidly, but carefully, off the stool on which he had been sitting, keeping the palms of his hands on the seat beside his hips until he felt his feet touch the floor. Then he darted at a book-shelf, pulled down a ponderous tome, flapped it open in a clear space on the floor, and dropped on his knees to consult it.

After turning a leaf or two he found what he was after, read down the page, keeping a finger on the lines, and, having finished his reading, jumped to his feet and hurried back to the stool, on which he mounted so quickly that it was impossible to see how he managed it—without an upset. Instantly he made a new diagram, and then fell to figuring furiously on the pad, making his pencil gyrate so fast that its upper end vibrated like the wing of a dragon-fly.

At last he threw down the pencil, and, encircling his knees with his clasped arms, sank in a heap on the stool. The lids dropped over his shining eyes, and he became buried in thought.

When he reopened his eyes and unbent his brows, his gaze happened to be directed toward a row of curious big photographs which ran like a pictured frieze round the upper side of the wall of the room. A casual observer might have thought that the little man had been amusing himself by photographing the explosions of fireworks on a Fourth of July night; but it was evident by his expression that these singular pictures had no connection with civic pyrotechnics, but must represent something of incomparably greater importance, and, in fact, of stupendous import....