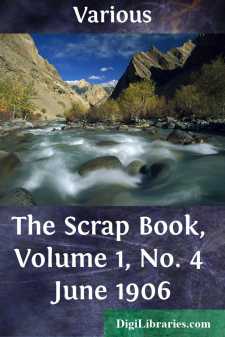 The Latest Viewpoints of Men Worth While.

Praise and Blame for American Women From Dr. Emil Reich—Earl Grey and Secretary Root Discuss the Relations of Canada and the United States—William J. Bryan Defines the Limits of Socialism—Rabbi Schulman Explains Certain Prejudices Against the Jews—William T. Jerome, Senator Lodge, and Norman Hapgood Criticize or Defend the Noble Army of Muck-Rakers—With Other Interesting Expressions of Opinion on Current Issues of the Day.

Compiled and edited for The Scrap Book.

FEMININE RULE MAY DOOM OUR COUNTRY.

American Women Are Like the Spartansin Their Desire to Dominate theAmerican Man.

Dr. Emil Reich has been lecturing to fashionable London on such universally fascinating themes as woman and love. According to the news despatches, so great has been the popularity of his talks that there have not been seats enough to accommodate his titled hearers, and at one lecture the Duchess of Portland sat on the floor. He has said of "Love and Personality":

Personality is always a mystery with its antithetically mingled elements in man and woman. Women have loved wrongly and known it, were perfectly aware of it—they only know also that they were helpless to avoid it; the desire of their lives has been gratified, something has happened.

What was there about George Sand, save perhaps pretty good eyes, to send such men as Alfred de Musset and Friedrich Chopin absolutely crazy? Nothing interesting about her—even her unattractiveness enhanced by her constant smoking. Yet she could inspire the "Prelude," which Chopin composed on seeing her approach in a garden in Minorca—the greatest piece of music ever compressed into a single page.

Goethe's Gretchen, the little bourgeoise, without apparent attractiveness, yet inspiring his mighty genius—what is this mystery of man and woman? The beauty of nations differs very much. The Latins are less beautiful than the Anglo-Saxons. The angularity of the North German woman is notorious; an uncharming person. Why? It has nothing whatever to do with race. The growth of the Hanseatic cities brought great wealth in North Germany; money-bags married money-bags; the result was a people of severely plain aspect. There are not many money-bags in America, although there are many money-bags in the hands of a few.

The American is insulted if mention of dowry is made in his wedding arrangements. He marries because he loves the woman and she him. Hence, the American people have become exceedingly beautiful. Then the facilities for divorce presented in the United States are an important factor in the beautification process. Love is really at the bottom of it all—not money-bags or race, but love.

The French are always talking about l'amour, l'amour; but really there is no amour there at all—people generally talk most about what they haven't got or don't know. Yes, indeed, so rare is l'amour in France that it accounts for the decline in facial beauty of the French woman—not in movement, for in movement she excels the world, but in face. Rome and Greece were ruined by treating marriage as a matter of business.

Complementary to Dr. Reich's praise of the American woman's beauty is his criticism of her love of domination. In that characteristic he reads the doom of America. We quote his reasons from the New York American:

Nations differ in nothing so much as in their women. The French, English, or American woman is easily distinguishable. The American woman is totally different from the English woman. So is the French woman, though the difference in this case is not so intense; so is the German woman; so is the woman of Italy. The American woman, while differing from all her European sisters of to-day, bears a marked resemblance to the woman of ancient Sparta. The Spartans resembled the present-day Americans; the Athenians were like the English.

I do not blame, I do not praise; I only say, and I say emphatically, that the American woman is not womanly; she is not a woman. The whole of the United States is under petticoat government, and man is practically non-existent.

In America, woman commands man. Man does not count there. The last man that came to America was Christopher Columbus. To-day, man has no existence; he does not talk in the drawing-room, but is a dummy. The woman lives one life, the man another, and they are totally distinct from each other.

The Best Complexion in the World.

She is as new as a man born to-day is new; she is made up of restlessness and fidgetiness long before she is twenty-five. But she is very beautiful; she has the best complexion in the world—better than that of any European woman. She is also well built and handsome. You see fine specimens of the American woman in Kentucky and Massachusetts.

A few miles distant from the Athens of old—what would be but a short railway journey in these days—lay Sparta. The Spartans were imperialists, and they wanted to conquer the whole of Greece. The Spartan woman, as I have remarked, was like the American woman of to-day. She never dreamed of lovers; her idea was nothing less than conquering man; she never thought of him as more than a fellow athlete.

There was no womanhood in them, no more than in so many sticks. The Athenians said that they were very fine, but there was nothing feminine about them. They were far richer, too, than the men, for the men went to the wars and died, and the women thus became rich. Aristotle said that the Spartan woman was sure to ruin Sparta very quickly. And so she did, for we find Sparta trying to rule Greece in the fourth century b.c.; in the third century she was sinking; in the second century she had ceased to exist.

Modern British men and women, what are they? That is what I want to bring out. A nation can never survive with women of the Spartan type, which, as I have told you, is the American woman of to-day....