The Science of Fingerprints Classification and Uses 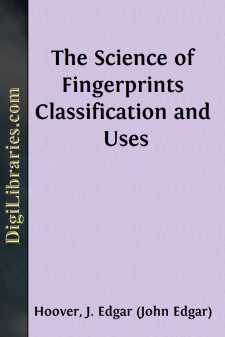 Criminal identification by means of fingerprints is one of the most potent factors in obtaining the apprehension of fugitives who might otherwise escape arrest and continue their criminal activities indefinitely. This type of identification also makes possible an accurate determination of the number of previous arrests and convictions which, of course, results in the imposition of more equitable sentences by the judiciary, inasmuch as the individual who repeatedly violates the law finds it impossible to pose successfully as a first, or minor, offender. In addition, this system of identification enables the prosecutor to present his case in the light of the offender's previous record. It also provides the probation officers, parole board, and the Governor with definite information upon which to base their judgment in dealing with criminals in their jurisdictions.

From earliest times fingerprinting, because of its peculiar adaptability to the field, has been associated in the lay mind with criminal identification to the detriment of the other useful phases of the science. However, the Civil File of the Identification Division of the Federal Bureau of Investigation contains three times as many fingerprints as the Criminal File. These civil fingerprints are an invaluable aid in identifying amnesia victims, missing persons and unknown deceased. In the latter category the victims of major disasters may be quickly and positively identified if their fingerprints are on file, thus providing a humanitarian benefit not usually associated with fingerprint records.

The regular contributors who voluntarily submit fingerprints to the Federal Bureau of Investigation play a most important role in the drama of identification. Their action expands the size of the fingerprint files, thereby increasing the value of the files to all law enforcement agencies. Mutual cooperation and efficiency are resultant by-products.

The use of fingerprints for identification purposes is based upon distinctive ridge outlines which appear on the bulbs on the inside of the end joints of the fingers and thumbs. These ridges have definite contours and appear in several general pattern types, each with general and specific variations of the pattern, dependent on the shape and relationship of the ridges....