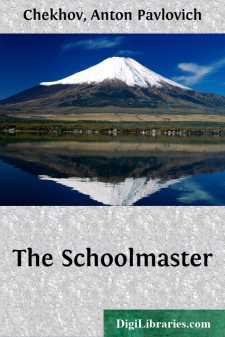 FYODOR LUKITCH SYSOEV, the master of the factory school maintained at the expense of the firm of Kulikin, was getting ready for the annual dinner. Every year after the school examination the board of managers gave a dinner at which the inspector of elementary schools, all who had conducted the examinations, and all the managers and foremen of the factory were present. In spite of their official character, these dinners were always good and lively, and the guests sat a long time over them; forgetting distinctions of rank and recalling only their meritorious labours, they ate till they were full, drank amicably, chattered till they were all hoarse and parted late in the evening, deafening the whole factory settlement with their singing and the sound of their kisses. Of such dinners Sysoev had taken part in thirteen, as he had been that number of years master of the factory school.

Now, getting ready for the fourteenth, he was trying to make himself look as festive and correct as possible. He had spent a whole hour brushing his new black suit, and spent almost as long in front of a looking-glass while he put on a fashionable shirt; the studs would not go into the button-holes, and this circumstance called forth a perfect storm of complaints, threats, and reproaches addressed to his wife.

His poor wife, bustling round him, wore herself out with her efforts. And indeed he, too, was exhausted in the end. When his polished boots were brought him from the kitchen he had not strength to pull them on. He had to lie down and have a drink of water.

"How weak you have grown!" sighed his wife. "You ought not to go to this dinner at all."

"No advice, please!" the schoolmaster cut her short angrily.

He was in a very bad temper, for he had been much displeased with the recent examinations. The examinations had gone off splendidly; all the boys of the senior division had gained certificates and prizes; both the managers of the factory and the government officials were pleased with the results; but that was not enough for the schoolmaster. He was vexed that Babkin, a boy who never made a mistake in writing, had made three mistakes in the dictation; Sergeyev, another boy, had been so excited that he could not remember seventeen times thirteen; the inspector, a young and inexperienced man, had chosen a difficult article for dictation, and Lyapunov, the master of a neighbouring school, whom the inspector had asked to dictate, had not behaved like "a good comrade"; but in dictating had, as it were, swallowed the words and had not pronounced them as written.

After pulling on his boots with the assistance of his wife, and looking at himself once more in the looking-glass, the schoolmaster took his gnarled stick and set off for the dinner. Just before the factory manager's house, where the festivity was to take place, he had a little mishap. He was taken with a violent fit of coughing . . . . He was so shaken by it that the cap flew off his head and the stick dropped out of his hand; and when the school inspector and the teachers, hearing his cough, ran out of the house, he was sitting on the bottom step, bathed in perspiration....