The School and the World 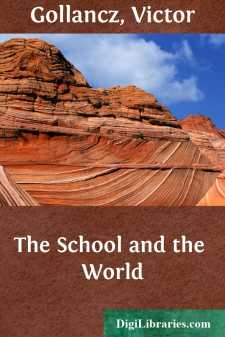 In December, 1917, the present writers wrote a little book entitled "Political Education in a Public School," in which they put forward their views as to what the aims and methods of a modern liberal education should be. They also described certain experiments which they had been permitted to make in one of our old English Public Schools, experiments which both illustrated the authors' principles and tested their value. In July, 1918, that book was published.

But in the intervening seven months several things had happened. On the one hand, "Political Education" had produced further striking evidence of its power over boys' intellects and characters, evidence altogether more striking than anything that had occurred up to the time of writing the book. On the other hand, the movement in the full tide of its success ran upon rocks and has been, for the time being at any rate, utterly and completely destroyed. The authors have left the school in which their experiments were made.

When the book was published, its reviewers in the press raised one by one a series of problems which we had already encountered in a practical shape in the course of our work, problems hardly touched on, however, in our book, which was devoted to exposition rather than argument. Such problems were: How far is political propaganda inseparable from political education, and in what respects is such propaganda desirable or undesirable? How can political differences among the masters themselves be made to play a helpful rather than an injurious part? Does the introduction of politics into the curriculum open a way, as the very able reviewer in The Westminster Gazette suggested, for Prussianism in its most insidious form, the conscription of educated opinion? Are the old Public Schools the best medium for political education, or should the new wine be poured into new bottles? and lastly—for educational "subjects" are or should be but aspects of a single whole—what of political education in relation to morality, and to religion?

The present volume, therefore, essays a twofold task. The first two chapters briefly recapitulate and continue the history of our work down to its abrupt end. The latter chapters deal with such questions as those mentioned above. One feature of the earlier volume survives in its successor. The Appendix to that volume contained a selection of articles written by boys for our political paper, The School Observer. As an Appendix to this volume we print a few more articles by boys whose work did not then appear. We are under no delusions as to there being anything very extraordinary about these articles and those printed in the previous volume. Abler work has been done by abler boys in various schools at various times. They are interesting as the combined effort of a group rather than as the work of individuals. We reproduce them as the only concrete evidence available of the character of one aspect of our experiment.

In the former volume we suppressed the name of the school out of deference to the wishes of the Head Master, and though our own judgment was against the concealment as a wholly superfluous piece of mystification, we continue to respect his wishes....