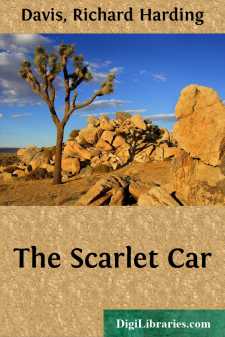 For a long time it had been arranged they all should go to the Harvard and Yale game in Winthrop's car. It was perfectly well understood. Even Peabody, who pictured himself and Miss Forbes in the back of the car, with her brother and Winthrop in front, condescended to approve. It was necessary to invite Peabody because it was his great good fortune to be engaged to Miss Forbes. Her brother Sam had been invited, not only because he could act as chaperon for his sister, but because since they were at St. Paul's, Winthrop and he, either as participants or spectators, had never missed going together to the Yale-Harvard game. And Beatrice Forbes herself had been invited because she was herself.

When at nine o'clock on the morning of the game, Winthrop stopped the car in front of her door, he was in love with all the world. In the November air there was a sting like frost-bitten cider, in the sky there was a brilliant, beautiful sun, in the wind was the tingling touch of three ice-chilled rivers. And in the big house facing Central Park, outside of which his prancing steed of brass and scarlet chugged and protested and trembled with impatience, was the most wonderful girl in all the world. It was true she was engaged to be married, and not to him. But she was not yet married. And to-day it would be his privilege to carry her through the State of New York and the State of Connecticut, and he would snatch glimpses of her profile rising from the rough fur collar, of her wind-blown hair, of the long, lovely lashes under the gray veil.

"'Shall be together, breathe and ride, so, one day more am I deified;'" whispered the young man in the Scarlet Car; "'who knows but the world may end to-night?'"

As he waited at the curb, other great touring-cars, of every speed and shape, in the mad race for the Boston Post Road, and the town of New Haven, swept up Fifth Avenue. Some rolled and puffed like tugboats in a heavy seaway, others glided by noiseless and proud as private yachts. But each flew the colors of blue or crimson.

Winthrop's car, because her brother had gone to one college, and he had played right end for the other, was draped impartially. And so every other car mocked or cheered it, and in one a bare-headed youth stood up, and shouted to his fellows: "Look! there's Billy Winthrop! Three times three for old Billy Winthrop!" And they lashed the air with flags, and sent his name echoing over Central Park.

Winthrop grinned in embarrassment, and waved his hand. A bicycle cop, and Fred, the chauffeur, were equally impressed.

"Was they the Harvoids, sir?" asked Fred.

"They was," said Winthrop.

Her brother Sam came down the steps carrying sweaters and steamer-rugs. But he wore no holiday countenance.

"What do you think?" he demanded indignantly. "Ernest Peabody's inside making trouble. His sister has a Pullman on one of the special trains, and he wants Beatrice to go with her."

In spite of his furs, the young man in the car turned quite cold. "Not with us?" he gasped....