The Salvaging Of Civilisation 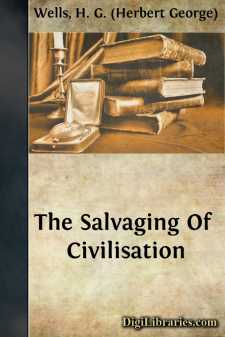 THE PROBABLE FUTURE OF MANKIND § 1

The present outlook of human affairs is one that admits of broad generalizations and that seems to require broad generalizations. We are in one of those phases of experience which become cardinal in history. A series of immense and tragic events have shattered the self-complacency and challenged the will and intelligence of mankind. That easy general forward movement of human affairs which for several generations had seemed to justify the persuasion of a necessary and invincible progress, progress towards greater powers, greater happiness, and a continual enlargement of life, has been checked violently and perhaps arrested altogether. The spectacular catastrophe of the Great War has revealed an accumulation of destructive forces in our outwardly prosperous society, of which few of us had dreamt; and it has also revealed a profound incapacity to deal with and restrain these forces. The two years of want, confusion, and indecision that have followed the Great War in Europe and Asia, and the uncertainties that have disturbed life even in the comparatively untouched American world, seem to many watchful minds even more ominous to our social order than the war itself. What is happening to our race? they ask. Did the prosperities and confident hopes with which the twentieth century opened, mark nothing more than a culmination of fortuitous good luck? Has the cycle of prosperity and progress closed? To what will this staggering and blundering, the hatreds and mischievous adventures of the present time, bring us? Is the world in the opening of long centuries of confusion and disaster such as ended the Western Roman Empire in Europe or the Han prosperity in China? And if so, will the debacle extend to America? Or is the American (and Pacific?) system still sufficiently removed and still sufficiently autonomous to maintain a progressive movement of its own if the Old World collapse?

Some sort of answer to these questions, vast and vague though they are, we must each one of us have before we can take an intelligent interest or cast an effective vote in foreign affairs. Even though a man formulate no definite answer, he must still have an implicit persuasion before he can act in these matters. If he have no clear conclusions openly arrived at, then he must act upon subconscious conclusions instinctively arrived at. Far better is it that he should bring them into the open light of thought.

The suppression of war is generally regarded as central to the complex of contemporary problems. But war is not a new thing in human experience, and for scores of centuries mankind has managed to get along in spite of its frequent recurrence. Most states and empires have been intermittently at war throughout their periods of stability and prosperity. But their warfare was not the warfare of the present time. The thing that has brought the rush of progressive development of the past century and a half to a sudden shock of arrest is not the old and familiar warfare, but warfare strangely changed and exaggerated by novel conditions....