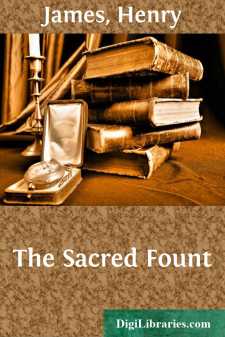 IT was an occasion, I felt—the prospect of a large party—to look out at the station for others, possible friends and even possible enemies, who might be going. Such premonitions, it was true, bred fears when they failed to breed hopes, though it was to be added that there were sometimes, in the case, rather happy ambiguities. One was glowered at, in the compartment, by people who on the morrow, after breakfast, were to prove charming; one was spoken to first by people whose sociability was subsequently to show as bleak; and one built with confidence on others who were never to reappear at all—who were only going to Birmingham. As soon as I saw Gilbert Long, some way up the platform, however, I knew him as an element. It was not so much that the wish was father to the thought as that I remembered having already more than once met him at Newmarch. He was a friend of the house—he wouldn't be going to Birmingham. I so little expected him, at the same time, to recognise me that I stopped short of the carriage near which he stood—I looked for a seat that wouldn't make us neighbours.

I had met him at Newmarch only—a place of a charm so special as to create rather a bond among its guests; but he had always, in the interval, so failed to know me that I could only hold him as stupid unless I held him as impertinent. He was stupid in fact, and in that character had no business at Newmarch; but he had also, no doubt, his system, which he applied without discernment. I wondered, while I saw my things put into my corner, what Newmarch could see in him—for it always had to see something before it made a sign. His good looks, which were striking, perhaps paid his way—his six feet and more of stature, his low-growing, tight-curling hair, his big, bare, blooming face. He was a fine piece of human furniture—he made a small party seem more numerous. This, at least, was the impression of him that had revived before I stepped out again to the platform, and it armed me only at first with surprise when I saw him come down to me as if for a greeting. If he had decided at last to treat me as an acquaintance made, it was none the less a case for letting him come all the way. That, accordingly, was what he did, and with so clear a conscience, I hasten to add, that at the end of a minute we were talking together quite as with the tradition of prompt intimacy. He was good-looking enough, I now again saw, but not such a model of it as I had seemed to remember; on the other hand his manners had distinctly gained in ease. He referred to our previous encounters and common contacts—he was glad I was going; he peeped into my compartment and thought it better than his own. He called a porter, the next minute, to shift his things, and while his attention was so taken I made out some of the rest of the contingent, who were finding or had already found places.

This lasted till Long came back with his porter, as well as with a lady unknown to me and to whom he had apparently mentioned that our carriage would pleasantly accommodate her. The porter carried in fact her dressing-bag, which he put upon a seat and the bestowal of which left the lady presently free to turn to me with a reproach: "I don't think it very nice of you not to speak to me." I stared, then caught at her identity through her voice; after which I reflected that she might easily have thought me the same sort of ass as I had thought Long. For she was simply, it appeared, Grace Brissenden. We had, the three of us, the carriage to ourselves, and we journeyed together for more than an hour, during which, in my corner, I had my companions opposite. We began at first by talking a little, and then as the train—a fast one—ran straight and proportionately bellowed, we gave up the effort to compete with its music. Meantime, however, we had exchanged with each other a fact or two to turn over in silence. Brissenden was coming later—not, indeed, that that was such a fact. But his wife was informed—she knew about the numerous others; she had mentioned, while we waited, people and things: that Obert, R.A., was somewhere in the train, that her husband was to bring on Lady John, and that Mrs....