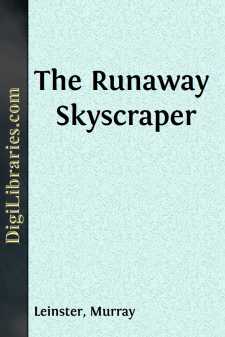 The whole thing started when the clock on the Metropolitan Tower began to run backward. It was not a graceful proceeding. The hands had been moving onward in their customary deliberate fashion, slowly and thoughtfully, but suddenly the people in the offices near the clock's face heard an ominous creaking and groaning. There was a slight, hardly discernible shiver through the tower, and then something gave with a crash. The big hands on the clock began to move backward.

Immediately after the crash all the creaking and groaning ceased, and instead, the usual quiet again hung over everything. One or two of the occupants of the upper offices put their heads out into the halls, but the elevators were running as usual, the lights were burning, and all seemed calm and peaceful. The clerks and stenographers went back to their ledgers and typewriters, the business callers returned to the discussion of their errands, and the ordinary course of business was resumed.

Arthur Chamberlain was dictating a letter to Estelle Woodward, his sole stenographer. When the crash came he paused, listened, and then resumed his task.

It was not a difficult one. Talking to Estelle Woodward was at no time an onerous duty, but it must be admitted that Arthur Chamberlain found it difficult to keep his conversation strictly upon his business.

He was at this time engaged in dictating a letter to his principal creditors, the Gary & Milton Company, explaining that their demand for the immediate payment of the installment then due upon his office furniture was untimely and unjust. A young and budding engineer in New York never has too much money, and when he is young as Arthur Chamberlain was, and as fond of pleasant company, and not too fond of economizing, he is liable to find all demands for payment untimely and he usually considers them unjust as well. Arthur finished dictating the letter and sighed.

"Miss Woodward," he said regretfully, "I am afraid I shall never make a successful man."

Miss Woodward shook her head vaguely. She did not seem to take his remark very seriously, but then, she had learned never to take any of his remarks seriously. She had been puzzled at first by his manner of treating everything with a half-joking pessimism, but now ignored it.

She was interested in her own problems. She had suddenly decided that she was going to be an old maid, and it bothered her. She had discovered that she did not like any one well enough to marry, and she was in her twenty-second year.

She was not a native of New York, and the few young men she had met there she did not care for. She had regretfully decided she was too finicky, too fastidious, but could not seem to help herself. She could not understand their absorption in boxing and baseball and she did not like the way they danced.

She had considered the matter and decided that she would have to reconsider her former opinion of women who did not marry. Heretofore she had thought there must be something the matter with them....