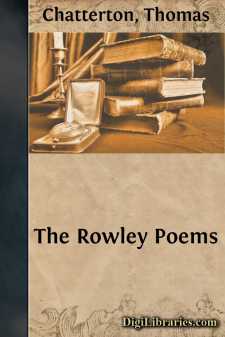 II. THE VALUE OF ROWLEY'S POEMS—PHILOLOGICAL AND LITERARY

As imitations of fifteenth-century composition it must be confessed the Rowley poems have very little value. Of Chatterton's method of antiquating something has already been said. He made himself an antique lexicon out of the glossary to Speght's Chaucer, and such words as were marked with a capital O, standing for 'obsolete' in the Dictionaries of Kersey and Bailey. Now even had his authorities been well informed, which they were not by any means, and had Chatterton never misread or misunderstood them, which he very frequently did, it was impossible that his work should have been anything better than a mosaic of curious old words of every period and any dialect. Old English, Middle English, and Elizabethan English, South of England folk-words or Scots phrases taken from the border ballads—all were grist for Rowley's mill. It is only fair to say that he seldom invented a word outright, but he altered and modified with a free hand. Professor Skeat indeed estimates that of the words contained in Milles' Glossary to the Rowley Poems only seven percent are genuine old words correctly used. The Professor in his modernized edition is continually pointing out with kindly reluctance that such and such a word never bore the meaning ascribed to it—that because, for instance, Bailey had explained Teres major as a smooth muscle of the arm it was not therefore any legitimate inference of Chatterton's that tere (singular form) meant a muscle and could be translated 'health'. Only occasionally does one find the note (written with an obviously sincere pleasure) 'This word is correctly used.' Of course it was impossible that Chatterton should have produced even a colourable imitation of fifteenth-century poetry at a time when even Malone—for all his acknowledged reputation as an English Scholar—could not quote Chaucer so as to make his lines scan. The Rowley Poems and Percy's Reliques mark the beginning of that renascence of our older poetry so conspicuous in the time of Lamb and Hazlitt. Before this epoch was the Augustan age, much too well satisfied with its own literature to concern itself with an unfashionable past.

But, after all, however absurd from any historical point of view the language and metres of the boy-poet may be, at least he invented a practicable language which admirably conveyed his impression of the latest period of the middle ages—that after-glow which began with the death of Chaucer. Chatterton's poetry is a pageant staged by an impressionist. It cannot be submitted to a close examination, and it is all wrong historically, yet it presents a complete picture with an artistic charm that must be judged on its own merits. An illusion is successfully conveyed of a dim remote age when an idle-strenuous people lived only to be picturesque, to kill one another in tourneys, to rear with painful labour beautiful elaborate cathedrals, and yet had so much time on their hands that they could pass half their lives cracking unhallowed sconces in the Holy Land and, in that part of their ample leisure which they devoted to study, spell 'flourishes' as 'Florryschethe'....