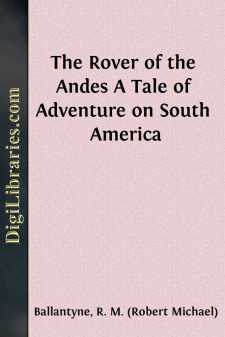 At the Foot of the Mountain Range.

Towards the close of a bright and warm day, between fifty and sixty years ago, a solitary man might have been seen, mounted on a mule, wending his way slowly up the western slopes of the Andes.

Although decidedly inelegant and unhandsome, this specimen of the human family was by no means uninteresting. He was so large, and his legs were so long, that the contrast between him and the little mule which he bestrode was ridiculous. He was what is sometimes styled “loosely put together;” nevertheless, the various parts of him were so massive and muscular that, however loosely he might have been built up, most men would have found it rather difficult to take him down. Although wanting in grace, he was by no means repulsive, for his face, which was ornamented with a soft flaxen beard and moustache of juvenile texture, expressed wonderful depths of the milk of human kindness.

He wore boots with the trousers tucked into them, a grey tunic, or hunting coat, belted at the waist, and a broad-brimmed straw hat, or sombrero.

Evidently the times in which he travelled were troublous, for, besides having a brace of large pistols in his belt, he wore a cavalry sabre at his side. As if to increase the eccentricity of his appearance, he carried a heavy cudgel, by way of riding-whip; but it might have been observed that, however much he flourished this whip about, he never actually applied it to his steed.

On reaching a turn of the road at the brow of an eminence the mule stopped, and, letting its head droop till almost as pendent as its tail, silently expressed a desire for repose. The cavalier stepped off. It would convey a false impression to say that he dismounted. The mule heaved a sigh.

“Poor little thing!” murmured the traveller in a soft, low voice, and in a language which even a mule might have recognised as English; “you may well sigh. I really feel ashamed of myself for asking you to carry such a mass of flesh and bone. But it’s your own fault—you know it is—for you won’t be led. I’m quite willing to walk if you will only follow. Come—let us try!”

Gently, insinuatingly, persuasively, the traveller touched the reins, and sought to lead the way. He might as well have tried to lead one of the snow-clad peaks of the mighty Cordillera which towered into the sky before him. With ears inclining to the neck, a resolute expression in the eyes, his fore-legs thrown forward and a lean slightly backward, the mule refused to move.

Peruvian mules are not open to flattery. The advance of the fore-legs became more decided, the lean backward more pronounced, the ears went flat down, and incipient passion gleamed in the eyes.

“Well, well, have it your own way,” exclaimed the youth, with a laugh, “but don’t blame me for riding you so much.”

He once more re-m–; no, we forgot—he once more lifted his right leg over the saddle and sat down....