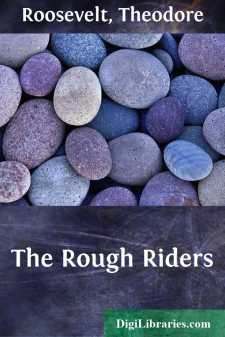 I RAISING THE REGIMENT

During the year preceding the outbreak of the Spanish War I was Assistant Secretary of the Navy. While my party was in opposition, I had preached, with all the fervor and zeal I possessed, our duty to intervene in Cuba, and to take this opportunity of driving the Spaniard from the Western World. Now that my party had come to power, I felt it incumbent on me, by word and deed, to do all I could to secure the carrying out of the policy in which I so heartily believed; and from the beginning I had determined that, if a war came, somehow or other, I was going to the front.

Meanwhile, there was any amount of work at hand in getting ready the navy, and to this I devoted myself.

Naturally, when one is intensely interested in a certain cause, the tendency is to associate particularly with those who take the same view. A large number of my friends felt very differently from the way I felt, and looked upon the possibility of war with sincere horror. But I found plenty of sympathizers, especially in the navy, the army, and the Senate Committee on Foreign Affairs. Commodore Dewey, Captain Evans, Captain Brownson, Captain Davis—with these and the various other naval officers on duty at Washington I used to hold long consultations, during which we went over and over, not only every question of naval administration, but specifically everything necessary to do in order to put the navy in trim to strike quick and hard if, as we believed would be the case, we went to war with Spain. Sending an ample quantity of ammunition to the Asiatic squadron and providing it with coal; getting the battle-ships and the armored cruisers on the Atlantic into one squadron, both to train them in manoeuvring together, and to have them ready to sail against either the Cuban or the Spanish coasts; gathering the torpedo-boats into a flotilla for practice; securing ample target exercise, so conducted as to raise the standard of our marksmanship; gathering in the small ships from European and South American waters; settling on the number and kind of craft needed as auxiliary cruisers—every one of these points was threshed over in conversations with officers who were present in Washington, or in correspondence with officers who, like Captain Mahan, were absent.

As for the Senators, of course Senator Lodge and I felt precisely alike; for to fight in such a cause and with such an enemy was merely to carry out the doctrines we had both of us preached for many years. Senator Davis, Senator Proctor, Senator Foraker, Senator Chandler, Senator Morgan, Senator Frye, and a number of others also took just the right ground; and I saw a great deal of them, as well as of many members of the House, particularly those from the West, where the feeling for war was strongest.

Naval officers came and went, and Senators were only in the city while the Senate was in session; but there was one friend who was steadily in Washington. This was an army surgeon, Dr. Leonard Wood. I only met him after I entered the navy department, but we soon found that we had kindred tastes and kindred principles....