The Romany Rye A Sequel to 'Lavengro' 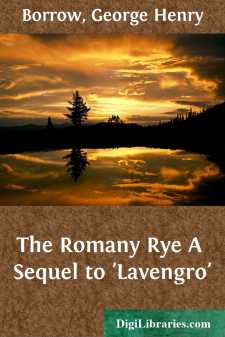 ‘Lavengro’ and ‘The Romany Rye’ are one book, though the former was published in 1851 and the latter not until 1857.  After a slumber of six years the dingle re-awakes to life, Lavengro’s hammer shatters the stillness, and the blaze of his forge again lights up its shadows, while all the strange persons of the drama take up their parts at the point where the curtain had been so abruptly rung down.  The post-chaise overturned in the last chapter of ‘Lavengro’ is repaired in the first of this sequel, the Man in Black proceeds with his interrupted disquisition, and Borrow resumes his cold-blooded courtship of poor Isopel, playing with her feelings as a cat with a mouse.  The dingle episode is divided equally between the two works; and had not ‘Glorious John,’ after a series of peremptory notes from the author, at last consented to publish ‘The Romany Rye’ ‘to oblige Mr. Borrow,’ we had lost some of the most delightful scenes of which that enchanted spot was the theatre.

What part of this narrative is Dichtung and what is Wahrheit has been a debated question.  In his chapter on pseudo-critics in the appendix to the present book, Borrow denies that he ever called ‘Lavengro’ an autobiography, or authorized any other person to call it so.  But it had been advertised for some months as, ‘Lavengro: an Autobiography’; while as early as 1843 Borrow writes to Murray that he is engaged upon his life; and as late as 1862, in an account of himself written for Mr. John Longe of Norwich, Borrow says that ‘in 1851 he published “Lavengro,” a work in which he gives an account of his early life.’  There is indeed no doubt that the earlier part of ‘Lavengro’ is, in the main, a true history of the life and adventures of George Borrow, however embellished here or there with Borrovian touches; it is only of the truth of the occurrences just before and after leaving London that scepticism has been expressed.  Borrow’s story, however, is so circumstantial that we should at least be able to discover whether this part of his history is credible and consistent.

Plainly, the year when Borrow leaves London is 1825.  ‘Somewhat more than a year before,’ in March (or rather April) of the year of Byron’s funeral, he had entered the ‘Big City,’ a youth verging on manhood.  In his preface to ‘Lavengro’ he speaks of the time as embracing ‘nearly the first quarter of the present century,’ and in ‘The Romany Rye’ refers to having edited the Newgate Chronicle some months ago.   We know also that his youthful contributions to literature ceased with his translation of Klinger’s ‘Faustus,’ published on April 18, 1825.  About this time, then, when Borrow was literally reduced to his last shilling, he describes himself as visiting a fair in the neighbourhood of London.  He refuses a loan of £50 from Jasper Petulengro, and, returning homewards, notices in a publisher’s window a request for a tale or novel.  Subsisting on bread and water, he writes in a week the ‘Life of Joseph Sell,’ for which he receives £20, and twelve days after attending the fair leaves London.  Passing through Salisbury, he travels northward and encamps in a dingle, where he is poisoned by his old enemy Mrs. Herne.  Saved by the timely intervention of a methodist preacher and his wife, he recovers on the following day (Sunday), and nine days later accompanies his friends to the Welsh border.  Here he again meets Jasper, returning with him the greater part of the day’s journey, settling in ‘Mumpers’ Dingle,’ where he is visited by his gypsy friends, four days before the Sunday upon which they all attend church.

A casual remark of Mr. Petulengro’s on this occasion affords a valuable clue to the precise date.  ‘Any news stirring, Mr. Petulengro?’ said Borrow; ‘have you heard anything of the great religious movements?’  ‘Plenty,’ said Mr. Petulengro; ‘all the religious people, more especially the evangelicals, those who go about distributing tracts, are very angry about the fight between Gentleman Cooper and White-headed Bob, which they say ought not to have been permitted to take place; and then they are trying all they can to prevent the fight between the lion and the dogs, which they say is a disgrace to a Christian country.’  The prize-fight between Baldwin and Cooper was fought on Tuesday, July 5, 1825, near Maidenhead.  The combat between the lion, Nero, and six dogs took place at Warwick on Tuesday, July 26, and for months beforehand had been the subject of much discussion in the London and provincial press....