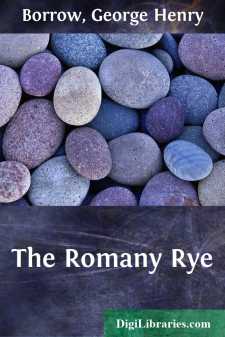 The Dingle at Night—The Two Sides of the Question—Roman Females—Filling the Kettle—The Dream—The Tall Figure.

I descended to the bottom of the dingle.  It was nearly involved in obscurity.  To dissipate the feeling of melancholy which came over my mind, I resolved to kindle a fire; and having heaped dry sticks upon my hearth, and added a billet or two, I struck a light, and soon produced a blaze.  Sitting down, I fixed my eyes upon the blaze, and soon fell into a deep meditation.  I thought of the events of the day, the scene at church, and what I had heard at church, the danger of losing one’s soul, the doubts of Jasper Petulengro as to whether one had a soul.  I thought over the various arguments which I had either heard, or which had come spontaneously to my mind, for or against the probability of a state of future existence.  They appeared to me to be tolerably evenly balanced.  I then thought that it was at all events taking the safest part to conclude that there was a soul.  It would be a terrible thing, after having passed one’s life in the disbelief of the existence of a soul, to wake up after death a soul, and to find one’s self a lost soul.  Yes, methought I would come to the conclusion that one has a soul.  Choosing the safe side, however, appeared to me to be playing a rather dastardly part.  I had never been an admirer of people who chose the safe side in everything; indeed I had always entertained a thorough contempt for them.  Surely it would be showing more manhood to adopt the dangerous side, that of disbelief; I almost resolved to do so—but yet in a question of so much importance, I ought not to be guided by vanity.  The question was not which was the safe, but the true side? yet how was I to know which was the true side?  Then I thought of the Bible—which I had been reading in the morning—that spoke of the soul and a future state; but was the Bible true?  I had heard learned and moral men say that it was true, but I had also heard learned and moral men say that it was not: how was I to decide?  Still that balance of probabilities!  If I could but see the way of truth, I would follow it, if necessary, upon hands and knees; on that I was determined; but I could not see it.  Feeling my brain begin to turn round, I resolved to think of something else; and forthwith began to think of what had passed between Ursula and myself in our discourse beneath the hedge.

I mused deeply on what she had told me as to the virtue of the females of her race.  How singular that virtue must be which was kept pure and immaculate by the possessor, whilst indulging in habits of falsehood and dishonesty!  I had always thought the gypsy females extraordinary beings.  I had often wondered at them, their dress, their manner of speaking, and, not least, at their names; but, until the present day, I had been unacquainted with the most extraordinary point connected with them.  How came they possessed of this extraordinary virtue? was it because they were thievish?  I remembered that an ancient thief-taker, who had retired from his useful calling, and who frequently visited the office of my master at law, the respectable S---, who had the management of his property—I remembered to have heard this worthy, with whom I occasionally held discourse, philosophic and profound, when he and I chanced to be alone together in the office, say that all first-rate thieves were sober, and of well-regulated morals, their bodily passions being kept in abeyance by their love of gain; but this axiom could scarcely hold good with respect to these women—however thievish they might be, they did care for something besides gain: they cared for their husbands.  If they did thieve, they merely thieved for their husbands; and though, perhaps, some of them were vain, they merely prized their beauty because it gave them favour in the eyes of their husbands.  Whatever the husbands were—and Jasper had almost insinuated that the males occasionally allowed themselves some latitude—they appeared to be as faithful to their husbands as the ancient Roman matrons were to theirs.  Roman matrons!...