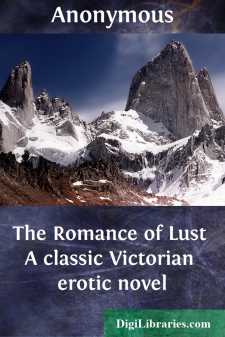 There were three of us—Mary, Eliza, and myself. I was approaching fifteen, Mary was about a year younger, and Eliza between twelve and thirteen years of age. Mamma treated us all as children, and was blind to the fact that I was no longer what I had been. Although not tall for my age, nor outwardly presenting a manly appearance, my passions were awakening, and the distinctive feature of my sex, although in repose it looked magnificent enough, was very sufficiently developed when under the influence of feminine excitement.

As yet, I had absolutely no knowledge of the uses of the different organs of sex. My sisters and I all slept in the same room. They together in one bed, I alone in another. When no one was present, we had often mutually examined the different formations of our sexes.

We had discovered that mutual handlings gave a certain amount of pleasing sensation; and, latterly, my eldest sister had discovered that the hooding and unhooding of my doodle, as she called it, instantly caused it to swell up and stiffen as hard as a piece of wood. My feeling of her little pinky slit gave rise in her to nice sensations, but on the slightest attempt to insert even my finger, the pain was too great. We had made so little progress in the attouchements that not the slightest inkling of what could be done in that way dawned upon us. I had begun to develope a slight growth of moss-like curls round the root of my cock; and then, to our surprise, Mary began to show a similar tendency. As yet, Eliza was as bald as her hand, but both were prettily formed, with wonderfully full and fat mounts of Venus. We were perfectly innocent of guile and quite habituated to let each other look at all our naked bodies without the slightest hesitation; and when playing in the garden, if one wanted to relieve the pressure on the bladder, we all squatted down together, and crossed waters, each trying who could piddle fastest. Notwithstanding these symptoms of passion when excited, in a state of calm I might have passed for a boy of ten or eleven.

My father had left us but moderately provided for, and mamma, wishing to live comfortably, preferred giving me lessons along with my sisters at home to sending me to school; but her health beginning to fail, she inserted an advertisement in the Times for a governess. Out of a large number of applicants, a young lady, of the name of Evelyn, was selected. Some ten days afterwards she arrived, and became one of the family.

We did not see much of her the first evening, but after breakfast the following morning, mamma accompanied her to what was considered our school-room, and said, "Now, my dears, I place you under Miss Evelyn's care; you must obey her in all things; she will teach you your lessons, as I am unable to do so any longer." Then, turning to our new governess, "I fear you will find them somewhat spoiled, and unruly; but there is a horse, and Susan will make you excellent birch rods whenever you require them. If you spare their bottoms when they deserve whipping, you will seriously offend me." As mamma said this, I observed Miss Evelyn's eyes appeared to dilate with a sort of joy, and I felt certain that, severely as mamma had often whipped us, if we should now deserve it, Miss Evelyn would administer it much more severely. She looked amiability itself, and was truly beautiful in face and person, twenty-two years of age, full and finely formed, and dressed always with the most studied neatness. She was, in truth, a seductive creature. She made an instantaneous impression on my senses....