The Rivals A Comedy 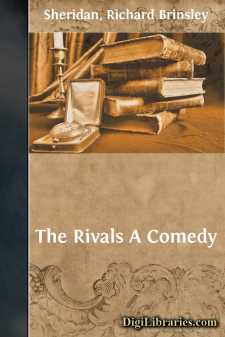 A preface to a play seems generally to be considered as a kind of closet-prologue, in which—if his piece has been successful—the author solicits that indulgence from the reader which he had before experienced from the audience: but as the scope and immediate object of a play is to please a mixed assembly in representation (whose judgment in the theatre at least is decisive,) its degree of reputation is usually as determined as public, before it can be prepared for the cooler tribunal of the study. Thus any farther solicitude on the part of the writer becomes unnecessary at least, if not an intrusion: and if the piece has been condemned in the performance, I fear an address to the closet, like an appeal to posterity, is constantly regarded as the procrastination of a suit, from a consciousness of the weakness of the cause. From these considerations, the following comedy would certainly have been submitted to the reader, without any farther introduction than what it had in the representation, but that its success has probably been founded on a circumstance which the author is informed has not before attended a theatrical trial, and which consequently ought not to pass unnoticed.

I need scarcely add, that the circumstance alluded to was the withdrawing of the piece, to remove those imperfections in the first representation which were too obvious to escape reprehension, and too numerous to admit of a hasty correction. There are few writers, I believe, who, even in the fullest consciousness of error, do not wish to palliate the faults which they acknowledge; and, however trifling the performance, to second their confession of its deficiencies, by whatever plea seems least disgraceful to their ability. In the present instance, it cannot be said to amount either to candour or modesty in me, to acknowledge an extreme inexperience and want of judgment on matters, in which, without guidance from practice, or spur from success, a young man should scarcely boast of being an adept. If it be said, that under such disadvantages no one should attempt to write a play, I must beg leave to dissent from the position, while the first point of experience that I have gained on the subject is, a knowledge of the candour and judgment with which an impartial public distinguishes between the errors of inexperience and incapacity, and the indulgence which it shows even to a disposition to remedy the defects of either.

It were unnecessary to enter into any further extenuation of what was thought exceptionable in this play, but that it has been said, that the managers should have prevented some of the defects before its appearance to the public—and in particular the uncommon length of the piece as represented the first night. It were an ill return for the most liberal and gentlemanly conduct on their side, to suffer any censure to rest where none was deserved. Hurry in writing has long been exploded as an excuse for an author;—however, in the dramatic line, it may happen, that both an author and a manager may wish to fill a chasm in the entertainment of the public with a hastiness not altogether culpable....