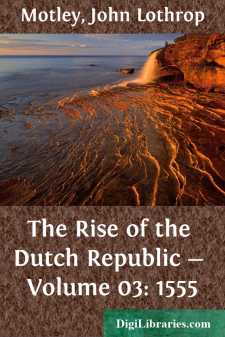 Abdication of Charles resolved upon—Brussels in the sixteenth century—Hall of the palace described—Portraits of prominent individuals present at the ceremony—Formalities of the abdication— Universal emotion—Remarks upon the character and career of Charles —His retirement at Juste.

On the twenty-fifth day of October, 1555, the estates of the Netherlands were assembled in the great hall of the palace at Brussels. They had been summoned to be the witnesses and the guarantees of the abdication which Charles V. had long before resolved upon, and which he was that day to execute. The emperor, like many potentates before and since, was fond of great political spectacles. He knew their influence upon the masses of mankind. Although plain, even to shabbiness, in his own costume, and usually attired in black, no one ever understood better than he how to arrange such exhibitions in a striking and artistic style. We have seen the theatrical and imposing manner in which he quelled the insurrection at Ghent, and nearly crushed the life forever out of that vigorous and turbulent little commonwealth. The closing scene of his long and energetic reign he had now arranged with profound study, and with an accurate knowledge of the manner in which the requisite effects were to be produced. The termination of his own career, the opening of his beloved Philip's, were to be dramatized in a manner worthy the august character of the actors, and the importance of the great stage where they played their parts. The eyes of the whole world were directed upon that day towards Brussels; for an imperial abdication was an event which had not, in the sixteenth century, been staled by custom.

The gay capital of Brabant—of that province which rejoiced in the liberal constitution known by the cheerful title of the "joyful entrance," was worthy to be the scene of the imposing show. Brussels had been a city for more than five centuries, and, at that day, numbered about one hundred thousand inhabitants. Its walls, six miles in circumference, were already two hundred years old. Unlike most Netherland cities, lying usually upon extensive plains, it was built along the sides of an abrupt promontory. A wide expanse of living verdure, cultivated gardens, shady groves, fertile cornfields, flowed round it like a sea. The foot of the town was washed by the little river Senne, while the irregular but picturesque streets rose up the steep sides of the hill like the semicircles and stairways of an amphitheatre. Nearly in the heart of the place rose the audacious and exquisitely embroidered tower of the townhouse, three hundred and sixty-six feet in height, a miracle of needlework in stone, rivalling in its intricate carving the cobweb tracery of that lace which has for centuries been synonymous with the city, and rearing itself above a facade of profusely decorated and brocaded architecture. The crest of the elevation was crowned by the towers of the old ducal palace of Brabant, with its extensive and thickly-wooded park on the left, and by the stately mansions of Orange, Egmont, Aremberg, Culemburg, and other Flemish grandees, on the right.. The great forest of Soignies, dotted with monasteries and convents, swarming with every variety of game, whither the citizens made their summer pilgrimages, and where the nobles chased the wild boar and the stag, extended to within a quarter of a mile of the city walls....