The Rise of the Dutch Republic - Volume 01: Introduction I 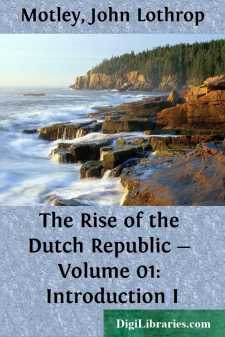 The rise of the Dutch Republic must ever be regarded as one of the leading events of modern times. Without the birth of this great commonwealth, the various historical phenomena of: the sixteenth and following centuries must have either not existed; or have presented themselves under essential modifications.—Itself an organized protest against ecclesiastical tyranny and universal empire, the Republic guarded with sagacity, at many critical periods in the world's history; that balance of power which, among civilized states; ought always to be identical with the scales of divine justice. The splendid empire of Charles the Fifth was erected upon the grave of liberty. It is a consolation to those who have hope in humanity to watch, under the reign of his successor, the gradual but triumphant resurrection of the spirit over which the sepulchre had so long been sealed. From the handbreadth of territory called the province of Holland rises a power which wages eighty years' warfare with the most potent empire upon earth, and which, during the progress of the struggle, becoming itself a mighty state, and binding about its own slender form a zone of the richest possessions of earth, from pole to tropic, finally dictates its decrees to the empire of Charles.

So much is each individual state but a member of one great international commonwealth, and so close is the relationship between the whole human family, that it is impossible for a nation, even while struggling for itself, not to acquire something for all mankind. The maintenance of the right by the little provinces of Holland and Zealand in the sixteenth, by Holland and England united in the seventeenth, and by the United States of America in the eighteenth centuries, forms but a single chapter in the great volume of human fate; for the so-called revolutions of Holland, England, and America, are all links of one chain.

To the Dutch Republic, even more than to Florence at an earlier day, is the world indebted for practical instruction in that great science of political equilibrium which must always become more and more important as the various states of the civilized world are pressed more closely together, and as the struggle for pre-eminence becomes more feverish and fatal. Courage and skill in political and military combinations enabled William the Silent to overcome the most powerful and unscrupulous monarch of his age. The same hereditary audacity and fertility of genius placed the destiny of Europe in the hands of William's great-grandson, and enabled him to mould into an impregnable barrier the various elements of opposition to the overshadowing monarchy of Louis XIV. As the schemes of the Inquisition and the unparalleled tyranny of Philip, in one century, led to the establishment of the Republic of the United Provinces, so, in the next, the revocation of the Nantes Edict and the invasion of Holland are avenged by the elevation of the Dutch stadholder upon the throne of the stipendiary Stuarts....