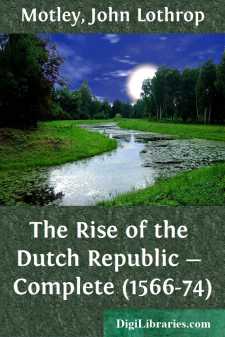 Egmont in Flanders, Orange at Antwerp, Horn at Tournay; Hoogstraaten at Mechlin, were exerting themselves to suppress insurrection and to avert ruin. What, meanwhile, was the policy of the government? The secret course pursued both at Brussels and at Madrid may be condensed into the usual formula—dissimulation, procrastination, and again dissimulation.

It is at this point necessary to take a rapid survey of the open and the secret proceedings of the King and his representatives from the moment at which Berghen and Montigny arrived in Madrid. Those ill-fated gentlemen had been received with apparent cordiality, and admitted to frequent, but unmeaning, interviews with his Majesty. The current upon which they were embarked was deep and treacherous, but it was smooth and very slow. They assured the King that his letters, ordering the rigorous execution of the inquisition and edicts, had engendered all the evils under which the provinces were laboring. They told him that Spaniards and tools of Spaniards had attempted to govern the country, to the exclusion of native citizens and nobles, but that it would soon be found that Netherlanders were not to be trodden upon like the abject inhabitants of Milan, Naples, and Sicily. Such words as these struck with an unaccustomed sound upon the royal ear, but the envoys, who were both Catholic and loyal, had no idea, in thus expressing their opinions, according to their sense of duty, and in obedience to the King's desire, upon the causes of the discontent, that they were committing an act of high treason.

When the news of the public preaching reached Spain, there were almost daily consultations at the grove of Segovia. The eminent personages who composed the royal council were the Duke of Alva, the Count de Feria, Don Antonio de Toledo, Don Juan Manrique de Lara, Ruy Gomez, Quixada, Councillor Tisnacq, recently appointed President of the State Council, and Councillor Hopper. Six Spaniards and two Netherlanders, one of whom, too, a man of dull intellect and thoroughly subservient character, to deal with the local affairs of the Netherlands in a time of intense excitement! The instructions of the envoys had been to represent the necessity of according three great points—abolition of the inquisition, moderation of the edicts, according to the draft prepared in Brussels, and an ample pardon for past transactions. There was much debate upon all these propositions. Philip said little, but he listened attentively to the long discourses in council, and he took an incredible quantity of notes. It was the general opinion that this last demand on the part of the Netherlanders was the fourth link in the chain of treason. The first had been the cabal by which Granvelle had been expelled; the second, the mission of Egmont, the main object of which had been to procure a modification of the state council, in order to bring that body under the control of a few haughty and rebellious nobles; the third had been the presentation of the insolent and seditious Request; and now, to crown the whole, came a proposition embodying the three points—abolition of the inquisition, revocation of the edicts, and a pardon to criminals, for whom death was the only sufficient punishment.

With regard to these three points, it was, after much wrangling, decided to grant them under certain restrictions....