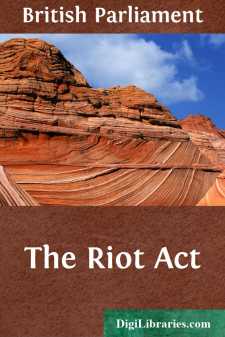 An act for preventing tumults and riotous assemblies, and for the more speedy and effectual punishing the rioters.

Whereas of late many rebellious riots and tumults have been in divers parts of this kingdom, to the disturbance of the publick peace, and the endangering of his Majesty's person and government, and the same are yet continued and fomented by persons disaffected to his Majesty, presuming so to do, for that the punishments provided by the laws now in being are not adequate to such heinous offences; and by such rioters his Majesty and his administration have been most maliciously and falsly traduced, with an intent to raise divisions, and to alienate the affections of the people from his Majesty therefore for the preventing and suppressing of such riots and tumults, and for the more speedy and effectual punishing the offenders therein; be it enacted by the King's most excellent majesty, by and with the advice and consent of the lords spiritual and temporal and of the commons, in this present parliament assembled, and by the authority of the same, That if any persons to the number of twelve or more, being unlawfully, riotously, and tumultuously assembled together, to the disturbance of the publick peace, at any time after the last day of July in the year of our Lord one thousand seven hundred and fifteen, and being required or commanded by any one or more justice or justices of the peace, or by the sheriff of the county, or his under-sheriff, or by the mayor, bailiff or bailiffs, or other head-officer, or justice of the peace of any city or town corporate, where such assembly shall be, by proclamation to be made in the King's name, in the form herin after directed, to disperse themselves, and peaceably to depart to their habitations, or to their lawful business, shall, to the number of twelve or more (notwithstanding such proclamation made) unlawfully, riotously, and tumultuously remain or continue together by the space of one hour after such command or request made by proclamation, that then such continuing together to the number of twelve or more, after such command or request made by proclamation, shall be adjudged felony without benefit of clergy, and the offenders therein shall be adjudged felons, and shall suffer death as in a case of felony without benefit of clergy.

And be it further enacted by the authority aforesaid, That the order and form of the proclamation that shall be made by the authority of this act, shall be as hereafter followeth (that is to say) the justice of the peace, or other person authorized by this act to make the said proclamation shall, among the said rioters, or as near to them as he can safely come, with a loud voice command, or cause to be commanded silence to be, while proclamation is making, and after that, shall openly and with loud voice make or cause to be made proclamation in these words, or like in effect:

Our sovereign Lord the King chargeth and commandeth all persons, being assembled, immediately to disperse themselves, and peaceably to depart to their habitations, or to their lawful business, upon the pains contained in the act made in the first year of King George, for preventing tumults and riotous assemblies....