The Right To Ignore The State 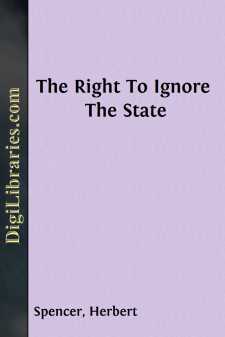 The Right to Ignore the State.

§ 1. As a corollary to the proposition that all institutions must be subordinated to the law of equal freedom, we cannot choose but admit the right of the citizen to adopt a condition of voluntary outlawry. If every man has freedom to do all that he wills, provided he infringes not the equal freedom of any other man, then he is free to drop connection with the State,—to relinquish its protection and to refuse paying towards its support. It is self-evident that in so behaving he in no way trenches upon the liberty of others; for his position is a passive one, and, whilst passive, he cannot become an aggressor. It is equally self-evident that he cannot be compelled to continue one of a political corporation without a breach of the moral law, seeing that citizenship involves payment of taxes; and the taking away of a man's property against his will is an infringement of his rights. Government being simply an agent employed in common by a number of individuals to secure to them certain advantages, the very nature of the connection implies that it is for each to say whether he will employ such an agent or not. If any one of them determines to ignore this mutual-safety confederation, nothing can be said, except that he loses all claim to its good offices, and exposes himself to the danger of maltreatment,—a thing he is quite at liberty to do if he likes. He cannot be coerced into political combination without a breach of the law of equal freedom; he can withdraw from it without committing any such breach; and he has therefore a right so to withdraw.

§ 2. "No human laws are of any validity if contrary to the law of nature: and such of them as are valid derive all their force and all their authority mediately or immediately from this original." Thus writes Blackstone, to whom let all honour be given for having so far outseen the ideas of his time,—and, indeed, we may say of our time. A good antidote, this, for those political superstitions which so widely prevail. A good check upon that sentiment of power-worship which still misleads us by magnifying the prerogatives of constitutional governments as it once did those of monarchs. Let men learn that a legislature is not "our God upon earth," though, by the authority they ascribe to it and the things they expect from it, they would seem to think it is. Let them learn rather that it is an institution serving a purely temporary purpose, whose power, when not stolen, is, at the best, borrowed.

Nay, indeed, have we not seen that government is essentially immoral? Is it not the offspring of evil, bearing about it all the marks of its parentage? Does it not exist because crime exists? Is it not strong, or, as we say, despotic, when crime is great? Is there not more liberty—that is, less government—as crime diminishes? And must not government cease when crime ceases, for very lack of objects on which to perform its function? Not only does magisterial power exist because of evil, but it exists by evil. Violence is employed to maintain it; and all violence involves criminality....