The Riches of Bunyan Selected from His Works 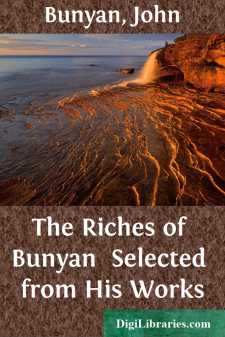 The subscriber has been requested by his friend the Rev. Jeremiah Chaplin, the worthy son of an honored father, [Footnote: The late Rev. Dr. Chaplin, the founder and first president of Waterville college, in the state of Maine.] and the editor of the present selections from Bunyan, to attach to them some prefatory remarks. Needless as he feels it himself to be, and presumptuous as, to some, the attempt even may seem, to say aught in behalf of a work that, faithfully drawn as it is from Bunyan's overflowing stores, can require no other recommendation; yet the subscriber could not refuse all compliance with the wishes of one who has given diligent and hearty and appreciating study to the rich and varied remains of "the immortal Dreamer."

Many of the Christians of our time, though conversant with the PILGRIM'S PROGRESS, and HOLY WAR, are apparently little aware of the glowing genius, and fervent piety, and strong sense, and picturesque imagery, and racy, vigorous English, that mark the many other writings of the honored tinker of Elstow. These last, if less known than the story of the pilgrimage to the Celestial City, and of the siege and recovery of the good town of Mansoul, yet bear all of them the traces of the same vivid fancy, the same earnest heart, and the same robust and sanctified intellect. To save from comparative disuse and consequent unprofitableness—from being buried in an undeserved seclusion, if not oblivion, many sparkling truths, and pithy sayings, and pungent rebukes, likely to do great good if they could but have, in our busy day, a more general currency over the wide mart of the world;—and to bespeak a new circle of influence, and a broader sphere of notoriety and usefulness for these overlooked legacies of a good and great man of a former age, has been the editor's object in the prolonged sifting to which he has subjected all Bunyan's writings. Of that patient and conscientious study the present selection has been the result. It is not hoped, or even wished for them, that in the case of any readers able to give the requisite leisure, these excerpts should supersede the original writings. But these last, in mass, are beyond the means and the time which are at the command of many Christians, who would yet greatly prize the briefer examples of Bunyan's experience and Bunyan's teachings that are here presented. And even to others of more affluence and leisure, this manual may serve to commend the author's works in their entireness. Mr. Chaplin himself would most anxiously disavow any claim to have exhausted the mines from which he brings these gatherings. His specimens resemble rather those laces which the good Bunyan tagged in Bedford jail—not in themselves garments, but merely adjuncts and ornaments of larger fabrics. He who would see the entire wardrobe of the Dreamer's mind, and the shape and proportions of the goodly vestures of truth in which he sought to array himself and his readers, must, after handling these the LACES, turn to the ROBES, from whose edge these have been skilfully detached....